The anatomy of the sell-off (conjob) 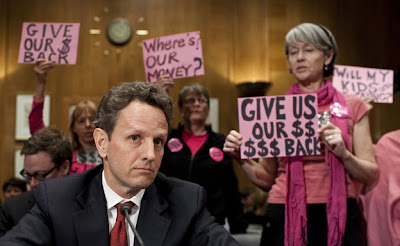 Monday we had wrong way Nouriel Roubini on CNBC warning the world of the catastrophe yet to happen.

Tuesday we had David "devil's advocate" Rosenberg on CNBC warning the world of the catastrophe yet to happen.

On Tuesday we also had these charts by Richard Russell being floated around the Internet, "proving" that the market was about to roll over. 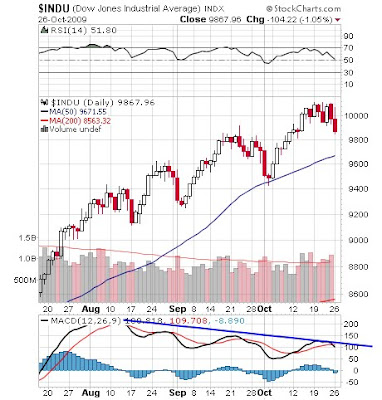 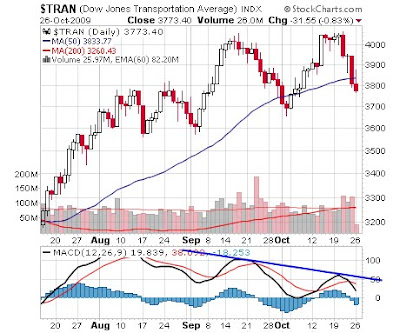 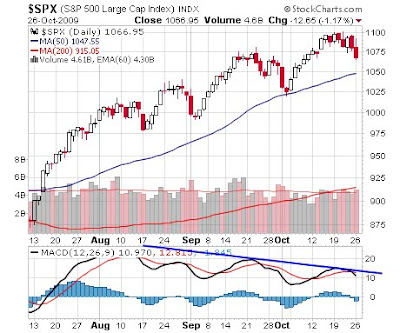 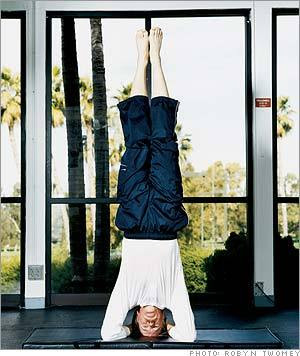 Now Wednesday we have Bill "5,000 Dow" Gross of PIMPCO on CNBC telling us that stocks are hopelessly overpriced and that this time, his call of the top is right on the money.

Bill Gross does yoga to help him think. Maybe he should lighten up on the headstands, and  walk on his feet, so he doesn't see the world upside down!

Bill Gross had John Hatzius from Goldman Sachs tag team him, who cut his estimate for Q3 GDP to 2.7%. Ooooooh. Goldman must "know" something!

It looks like they know something. They knew their prop desk was short and the stock prices had to come in! At least I advertised that here, and here! 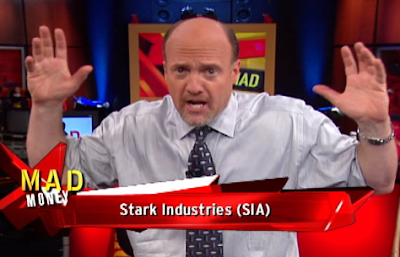 And then, last night, Cramer went on Mad Money and said that "now the correction is here!" He forgot we were in real life, not reel life!

This morning, we see that SocGen came out with a piece that stocks were hopelessly overvalued, and that the stock drop could turn into a "rout!"

Oct. 29 (Bloomberg) -- The two-week retreat in global equities may turn into a “rout” after a measure of so-called leading indicators fell, signaling the economic recovery may be peaking, according to Societe Generale SA’s Albert Edwards.

Morgan Stanley chimed in and said "Stock Market 'Bubble' to End" with this piece:

Oct. 29 (Bloomberg) -- The global stock market rally, which resembles the bull run between 2003 and 2007, will end as government spending slows after so-called easy money boosted asset prices, according to Morgan Stanley.

And finally, to even suck in the depressed New Yorkers, whose Yankees got trounced by the Phillies, we saw this piece:

analysts of the game know Philadelphia’s triumph last night is the worst omen for the economy if history repeats itself. 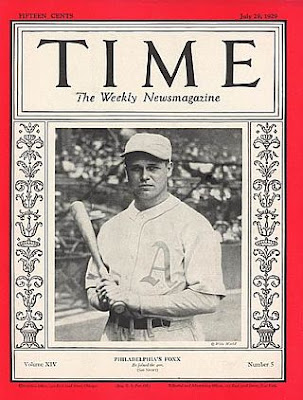 Why? Because the Philadelphia Athletics went back-to-back in 1929 and 1930! And wasn't that the start of the Great Depression?

Maybe the analyst forget to tell Wall Street that Jimmy Fox's nickname was "The Beast." And isn't this the market of the beast?

So much for anecdotal evidence!

And finally, Cramer this morning tells the world that the $14 trillion US Economy would puke because SPW, a $2.6 billion dollar company, didn't have visibility, and also because Flowserve had downplayed future expectations last night!

Right then, the entire bear thesis is OVER!

But Rick Santelli came on CNBC, and said that GDP figure was a backward looking indicator!

Thanks for the help boys! I covered my shorts at prices I never should of had!!!

But the bears forgot, that Wall Street's chief pimp, Timmy Geithner was speaking before the hallowed  halls of Congress, and he wanted prices higher. After all, his boss, needed to be on the airwaves touting the growth the Government bought!

So we had an orchestrated sell-off, to help the big boys who were short, and had it going against them.

If the stock market was wrestling, everyone would know it was phony. 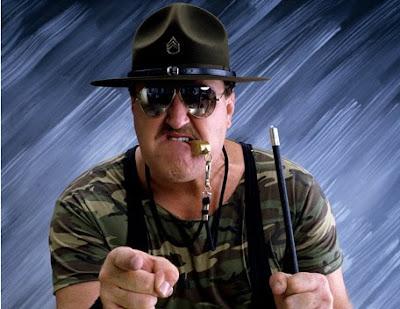 But Wall Street dresses up their pimps, and trots them out on CNBC, and does their best to convince you, the move is real.

They want to slaughter you.

Which is why, I said the script changed.

After it already rallies, of course!!

And after the bears, are once again, slaughtered!
Posted by Palmoni at 6:53 PM