$337 billion has shifted into mutual funds

Most of the money has been going into bonds. As an example $34.7 billion went into bond funds in July, and $42.9 in August.

Below is a much fairer graphical representation of the money flows.

Throughout this rally, the comparitive inflows in stocks have been week, while money is still going into bond funds.

A lot of money is still going into PIMCO. The PIMCO Commodity Real Return Fund (PCRAX) has taken in well over $5 billion this year.

Remember when oil was going thru the roof? PIMCO argued their actions in their funds had no bearing on the price.

When the fund had outflows, oil of course cracked. 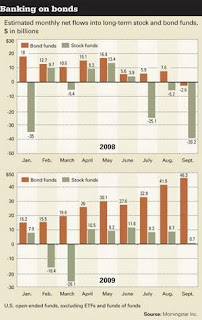 Here's the story on PCRAX at the top of the commodity market last year.

Yesterday, Bill Gross said that all asset prices were over-valued.

But he then said, the Fed would keep interest rates artificially low until we have sustainable 4% GDP growth.

So with two year notes at less than 1%, will investors sit idly on their cash?

The fund inflows show that so far they're not.

They've been in on the pump.
Posted by Palmoni at 8:07 AM