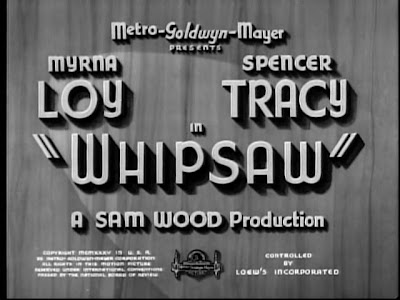 Some great commentary by Richard Russell on Thursday after the close. I used his charts a few days ago, and I thought the charts were telling "lies." This time it didn't.

Every time in this market, we needed to buy the breakdown. This time it didn't hold.

I've been whipsawed these last few days, and that normally happens at turning points.

So it's time for a skeptical viewpoint from Richard Russell:

October 29, 2009 -- "Struggling business owners and millions of unemployed Americans may not believe it, but the government expects to report today that the US economy turned a corner and resumed growth in the third quarter in what would mark the end to the worst recession since World War II." -- from the front page of today's Los Angeles Times

The recent weakness in the stock market has an important significance. The weakening market implies that the Obama administration is failing to halt or reverse the primary bear trend. If the Bernanke-Geithner-Obama team fails to halt the bear market, it means that the forces of world deflation will dominate. This is the reason why gold declines when the stock market weakens or declines.

We are now watching one of two possibilities. The frustrating part of it is that at this time there is absolutely no way of knowing which of the two scenarios is the correct one. Personally, I favor the first scenario which I will now describe.

(1) The primary trend of the stock market and the economy remains bearish. The advance from the March lows represents a correction or a rally in the bear market. The rally now appears to be in trouble. In fact, the rally may now be in the process of topping out. If this is indeed a rally in a continuing bear market, then in due time the Dow and the majority of stocks will decline and violate their March lows. If both the Industrials and Transports violate their March lows, it will be a signal that the primary bear market has been reconfirmed. However, if both Averages decline, and then rise to new highs, this will be a very bullish indication. It will be a sign that I have been wrong, and that we are probably in a bull market.

If the first scenario comes to pass, this would be a disaster, but we must deal what the market gives us. A violation of the March lows by both Industrials and Transports would mean that really hard times lie ahead and that deflation will dominate the US and probably the rest of the world. Furthermore, it would mean that all the trillions that the Obama administration has spent have gone for naught.

I've said all along that no force or no amount of money can halt or reverse the primary trend, in this case the bear trend. Ben Bernanke, a student of the Great Depression, was certain that an unlimited flood of money ("quantitative easing") could turn deflation into inflation. and halt the bear market. So far, all Bernanke's money flood has accomplished is to load the US with the greatest amount of debt taken on by any nation in human history (the law of unintended consequences).

In the face of the above, what are you and I to do? How do we defend ourselves against government ignorance and stupidity? I've given this matter a lot of thought, and my conclusion is that at this juncture there is no single "correct" answer. My own answer is to diversify. Keep a third of your money in gold or gold ETFs, keep another third in cash or a currency, preferably not US dollars, and keep a final third in a paid-off home. The key to the future may lie in a single word -- intrinsic. Do you own items of intrinsic value? Do you own items that cannot go bankrupt? Along those lines I'm talking about anything that is tangible and that has no debt against it. This may include real estate, land, quality gems with certificates, gold, silver, platinum, your own business.

Remember, I believe the advance from the March low is in the process of topping out. But we still do not know whether it is a bull market advance that is simply correcting -- or whether we've seen a rally in an ongoing bear market. It's the latter that I'm worried about.

Dramatic times coming up, and I'll tell you all I know as we go along, which is why I have decided to write a daily site.

In the meantime, it's "the market gone wild" as bull and bear traders make their moves. The Dow is up 100 points one day, down 100 points the next day. Trying to make anything out of what seems like an erratic "out-of-control" Dow seems hopeless. However, it appears that the Transports have made an important statement in breaking below their preceding low. If the Dow now rallies to new high (high was on Oct. 19, Dow 10092.19) the Transports will probably be far behind. We'll watch for what could be a crucial non-confirmation.

Below we see the daily charts of the two D-J Averages, as of today's close. Note the dramatic weakness in the Transportation Average -- even after today's big Dow surge. 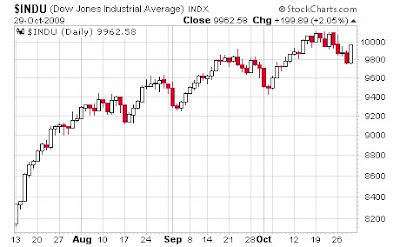 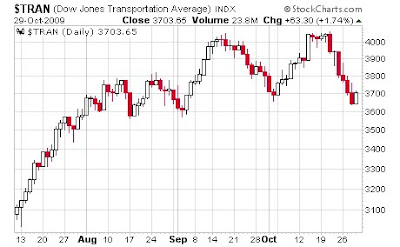 Below we see the widely-followed S&P 500. On Wednesday the S&P closed below it most recent bullish trendline. 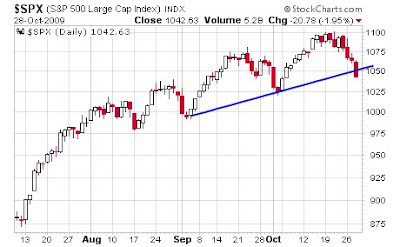 The Wilshire 5000 provides a very broad view of the markets, and here the same thing is seen, a Wednesday violation of the rising trend. 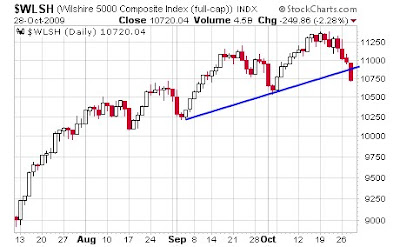 PTI -- My PTI has been declining over recent days and is now just 8 points above its MA. As you can see on the chart below, my PTI has not been this close to its MA in over a year. My PTI is a measure of the internal structure of the market. Sometimes the PTI leads and at other times it is coincident. 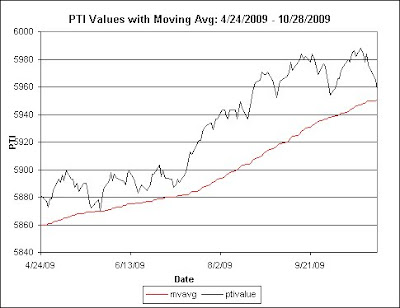 Gold -- Up to now, gold almost "mindlessly" mirrors-in-reverse the action of the dollar -- this occurs even on a daily basis. If the dollar is down today, gold advances and if the dollar is up today, gold declines. I'm holding gold for the long term as a defense against fiat money. In the history of fiat or government-produced paper money, no fiat money in history has ever survived, all are now museum pieces. The reason is that fiat money is produced (without the discipline of gold) in any quantities a government desires. When an economy slows (as now) or when a nation goes to war (which is always wildly expensive, as now) the temptation to print the needed "wealth" becomes overwhelming.

Eventually, the world distrusts man-made "money." In the end, each new issue of fiat money dies. The fate of the US dollar will be no different. Which is the real reason why we hold gold for the long-term.

Late Notes: Yesterday's stock market action was unusually poor. Every major stock average but the Dow closed below its 50-day moving average. Investor's Business Daily monitors 197 industry groups. Yesterday not one of these groups finished higher. The result was a severely oversold market, leading to the bounce today. Today, the Dow surged 199 points. Nothing like a big Dow pop to keep investors bullish and happy (remember, the Dow high was 10092). On the NYSE, 546 issues closed higher, 80 lower. UP volume on the NYSE was 88% of up + down volume. The lagging Transports closed up 63 to 3703.

Tomorrow's Friday and the last day of the month. We got through the dreaded September and October months. Will the market cross us up during November and December?

I heard Goldman was going to pay their bonuses in stock. So taking down their stock price will mean each person receives more stock for compensation then they can just goose up it later when they wanna sell out.

You think this is the correction in time with the markets or did the bears finally grow a pair?

Also I've heard that "good" news will be coming out of that Colombian company by the end of November, but the information was privileged. You have any ideas what it can be? Thanks!

I'm glad it's the end of the week and I can watch some football!

what do you see...i guess R is playing both but more towards bear...i saw that sp chart the last two days and didn't react to it as i thought it could bounce above the lines and that you needed more than ust one line...

if you're not short the market but financials...how do you play it?

you have a good birdie!!