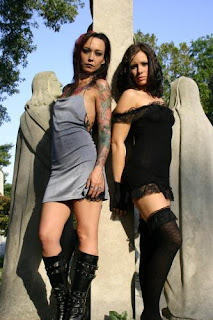 The South Carolina deputy assistant Attorney General, Roland Corning! Who rushed from his amorous adventures in the cemetery, only to be pulled over by a policeman.

Now we see his Halloween treat was just a trick!

He said he went out on a lunch break. Maybe he ate at the Y.

But before he could tell the world how "emotional" this relationship was, they fired him. He was 66, she was 18. But you gotta hand it to him for his Halloween sense of adventure!

Remember SC Governor Mark Stanford? He said he went hiking in the Appalachians, when he went to Argentina to be with his mistress.

I guess the Gamecocks are in the house!
Posted by Palmoni at 8:25 AM

20 dead as avalanches cause havoc across europe
|