Goldman on pay: "We have to tolerate the inequity" 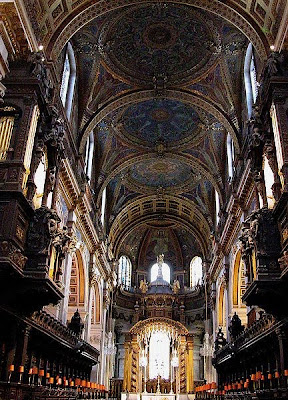 Oct. 21 (Bloomberg) -- A Goldman Sachs International adviser defended compensation in the finance industry as his company plans a near-record year for pay, saying the spending will help boost the economy.

“We have to tolerate the inequality as a way to achieve greater prosperity and opportunity for all,” Brian Griffiths, who was a special adviser to former British Prime Minister Margaret Thatcher, said yesterday at a panel discussion hosted by St. Paul’s Cathedral in London. The panel’s discussion topic was, “What is the price of morality in the marketplace?”

The irony. The bankers love holding these forums at St. Paul's. Remember the forum last April? "Money, integrity and wellbing" and "My word is my bond."

Whatever happened to that?

But it looks good, doesn't it? But these pimps, even on that stage, flip the world the bird but its done in "bankerspeak."

"We have to tolerate the inequity."