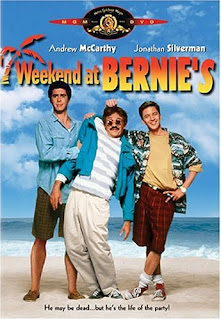 Bernie "The Bruiser" Madoff got into a prison-yard tussle with a fellow inmate over -- of all things -- the stock market, eyewitnesses told The Post.

And, by inmates' accounts, the 71-year-old Ponzi schemer came out the winner.

Madoff, serving 150 years at the Butner, NC, federal prison, was heard last week getting into a heated debate over the state of the market with another senior-citizen jailbird.

The shouting match got so heated that the inmate pushed Madoff, who shoved back harder with both hands, causing his attacker to stumble.

As the attacker tried to stand up straight, Madoff hovered over him red-faced and glaring, eyewitnesses said.

The stunned attacker went chicken and took off -- allowing Madoff to collect some "cred" among his fellow prisoners.

"I didn't think Bernie had it in him. He got the best of him; he was really aggressive, and the other guy was in shock that he fought back," an inmate said.
Posted by Palmoni at 8:26 AM

i'm beginning to want to take a shot at APWR...just cashed out of GCI...not sure if it was too early...but the earnings call this week is probably the cause.

at $11 where does APWR run from here?

crap...got suckered in and sold out of GCI yesterday at low 13s...always a nice run after i sell

I'm lucky I still have my Nov. calls. Looks like another one day press down by the bears. But see the action in McClatchy (MNI)? Newspaper stocks are doing better--and rumors of GOOG interest in some of these names.

I like APWR, but I think it needs to consolidate just a bit more if you are looking at it for an option play.

how much more legs do you think MNI has?

I'm not going to chase it here

what do you think about Lee?

X seems to be breaking out. Good Call Palmoni. Cheers

why do shares like INTC get halted from trading?