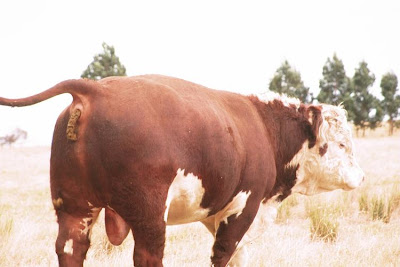 I would think that one Saturday morning, I would get a respite from Barron's bearishness, or their simplistic ways. But I can't. Their journalistic ineptitude in forecasting and folly just needs to seep thru their pages. And today, it's Rosenberg again!

Look what Alan Ableson had to say in his column:


ONE OF THE THINGS THAT NEVER CEASES TO amaze us is how those latter-day Nostradamuses who can't accurately project a company's earnings a quarter ahead have no trouble in telling what they'll be two or three years out. If only we had been blessed with such farsightedness.

In a recent report on valuation, David Rosenberg, of Gluskin Sheff, notes that on an operating ("scrubbed") basis the price/earnings ratio of the Standard & Poor's 500 has expanded a whopping 10 points since its March low, and stands at 27.6. Historically, Dave observes, when the economy is making the switch from contraction to expansion, as it did in the third quarter, the P/E is 15.

Trailing earnings are untouched by clairvoyance, in contrast to forward earnings, which depend heavily on projecting the future. But such estimates have their drawbacks, particularly since Wall Street forecasters are a cheerful lot predisposed toward upbeat prognostication.

Currently, Dave reckons, the S&P 500 is priced for $83 in operating earnings, or double the most recent four-quarter trend, and normally it takes five years for profits to double from a recessionary low. Such a feat would be more than a little impressive, since revenues, for the first time ever, have registered four quarters in a row of double-digit decline.

Given the going estimates for operating earnings of $48 a share this year, $53 next year, $63 in 2011 and $81 for 2012, he concludes that "the market is basically discounting an earnings stream that even the consensus does not see for another two to three years." In Dave's book, stocks remain more than fully priced.

--------
That's Rosenberg's latest bullsh*t, but Barron's is quoting it like it's holy writ. Here is the actual report--and the V is for valuation, and quite frankly, his analysis is worthless.

As you can see, in Barron's and in his report, Rosenberg's beef is with the forward PE. 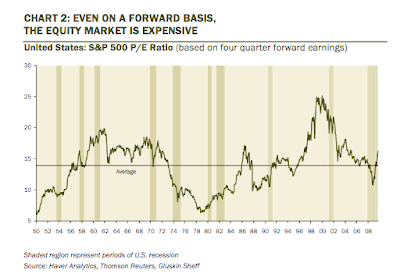 And to make his point, he goes back to 1950, so he can skew the average PE down. Amazing. Rosie didn't go back to the depression! Maybe because that is what he is now suffering; but like a crotchety old man, he just lashes out at the market since it disagress with his viewpoint.

I'm just going to make my argument brief. On the above chart, since 1990, stocks are just about selling at the lowest forward PE level in twenty years! So how are stocks expensive?

If we make $83 next year, and we sell at just the average forward PE of the last twenty years--well I don't know what it is by the graph--but let me do my own math. I say we are heading to 1440 next year on the S&P. So let me divide that by $83. Would a forward PE of 17.3 seem unrealistic? With short rates close to zero?

And Rosenberg, being the liar that he is--Oh that's right--I can't say that--but he is--it's just dressed up intellectually so you can't see it--says that interest rates aren't really lower today. Oh. So the $3 trillion sitting in money markets getting less than 1% isn't real? Because Rosie has a different definition of real. His "real rate" is the rate on a Baa corporate bond!

Doesn't he have any shame?

The piece that will be right on the market is this. Not Rosie's. Just like this piece was right. Read all of it and weap bears. Oil, stocks, bonds and natural gas. Each and every one, hit out of the park.

But you need to dress up your homework with slick charts and even slicker talk to convince the masses you are an intellectual heavyweight worth listening to.

He may be smart, but he's been a lousy forecaster of the stock market since 666, and isn't that how things are measured on Wall Street?

Oh that's right--I forgot. Wall Street is the most forgiving institution on the world for those who make lousy market calls!

Just look at the cover of Barron's.