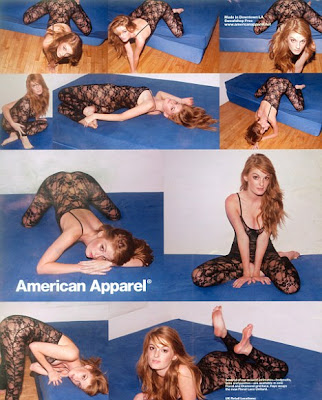 Anyone see the irony in that? That's the work of Dov Charney, APP's Chairman and CEO, who is a walking sexual harassment lawsuit.

But he puts up a pretty good defense. Check out this piece on him. He gives it as good as he gets it in his deposition, and he even left Dateline confused.


Last month, American Apparel had to fire 1800 workers  because of documentation problems. US Immigration and Customs Enforcement agency cited APP for record keeping violations, and not knowingly hiring  illegals. APP's clothes are truly "Made in the USA" and they had a very progressive hiring policy, that paid well, and gave good benefits to many undocumented workers.

In Charney's letter to the workers, he said he was disappointed in the Obama administration, and its failure to bring immigration reform.

Here was the letter that he wrote:

Although many of you do not know it, my grandmother was a sewer in a clothing factory in the 1930's in Montreal. When I was in high school I wrote a composition about her entitled, "The Immigrant," where I described what life was like for her working as a garment worker at $7 per week.

When I first started American Apparel my grandmother and grandfather, both Jewish immigrants, loaned me money to get the business started.

Although my grandmother never got to see the factory, my grandfather came to Los Angeles before he died and he saw the 6th and 7th floors of the factory.

I am deeply saddened by the fact that many of you will be leaving the company over the next few days and weeks.

Many of you have been with me for so many years, and I just cry when I think that so many people will be leaving the company.

As many of you know, we have been marching for immigration reform since 2001.

Although some of you are leaving the company, I want you all to know that when you are able to get your immigration papers in order, you will be given priority treatment, in terms of being interviewed for future positions with the company.

I am deeply disappointed that the Obama administration has failed to bring about immigration reform. Whereas I know he has the intention to do so, getting the job done is another story. Let's not forget that George Bush wanted to bring about immigration reform, but could not get it done. Ironically, the rallying cry of the Obama campaign was the words of Cesar Chavez, "Yes we can" or "Si se puede", which inspired so many people, particularly Latinos in the recent election.

Although many people forget, migration has been going on for thousands of years, and it will continue for ever. My true dream is that one day we will all live in a world without borders.

Those of you that need to contact me personally can always reach me at my personal e-mail address: dov@americanapparel.net

I want to thank you for helping me build the company to what it is today.

Although I am crying as I write you this letter, I am confident that immigration reform will be achieved in the near future.

I will continue to fight for immigration reform for the rest of my career.

Right now I will work hard to put pressure on political forces to help facilitate the legalization of workers here in the country, and as a second priority help bring about immigration reform on a go forward basis.

I wish you the best and I open my heart to you all.


The stock hasn't rallied, because it comes with a lot of baggage.
Posted by Palmoni at 10:27 AM

Charney (in deposition tape): I frequently drop my pants to show people my new product

I think that sums up everything :P

what do you think is going to happen to GCI on monday? you think we're going to get a big hit? was this expected at all?

I don't think it matters