Vivus (VVUS now trading up 3 to 10) had great results with their obesity drug, Qnexa:

Patients taking Qnexa, on average, reduced their weight by up to 14.7 percent in one trial, while the drug also prompted improvement in blood pressure and diabetes risk factors. A second study showed weight loss of about 13.2 percent. In both studies, patients taking placebo lost less than 3 percent of their weight.

The studies included more than 3,750 patients taking a mix of three doses and placebo.

Vivus said the results support the company's plan to ask for Food and Drug Administration approval by the end of 2009. That could put the company's application ahead of a key competitor, Orexigen Therapeutics Inc.'s Contrave32.
------

Now maybe you won't have to pay a bigger tax on soda pop!

Because Bo came up with this new "sin" tax:
The President, in an interview with Men's Health magazine released yesterday, said he thought taxing soda and other sugary drinks is worth putting on the table as Congress debates health care reform. "It's an idea that we should be exploring," the president said. "There's no doubt that our kids drink way too much soda. And every study that's been done about obesity shows that there is as high a correlation between increased soda consumption and obesity as just about anything else. 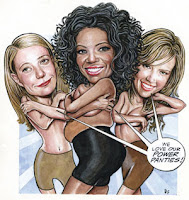 What tax is next?

Wait---they better not do that.

They might get some supporters!
Posted by Palmoni at 8:16 AM

Do you know why FIG is screaming today?

Barclays put a buy on it

Seriously.... where you get these pictures?? I love them!!

Dollar is getting killed, Bernanke needs to cool off on the printing press for a bit.

It's a massive shift from paper dollars into real assets. I didn't think it was going to happen that fast, but it is.

If China is supposedly Uncle Sam's partner in the revised PPIP, then it means we need higher stock prices, higher asset prices, and a lower dollar.

But the market sees that already--and it is forcing the hand in a hurry!

what's your take on GCI?

GCI fell back because it was touted down last Friday by optionmonster.com.

I don't buy that story, and I think it moves up

at what price do you think the FACT deal gets done?

Palmoni, I'd love to hear your opinion on what gold price may do in the short term.

I think 17ish even though that is book value, and the stock has $14 a share in cash. They'll spend $100 million on trials over the next, so there still is a burn rate--and this market never gives any of the companies credit until after they have some trial results.

"Seriously.... where you get these pictures?? I love them!!"

I second that!
I love this BLOG and can tell there's a lot of hard work that goes into it, gratis

I got my own positions but it's still interesting to see how P plays these markets.

Thanks for the kudos because I know I'll never hear any from Wall Street!