Goldman Sachs just doesn't get it 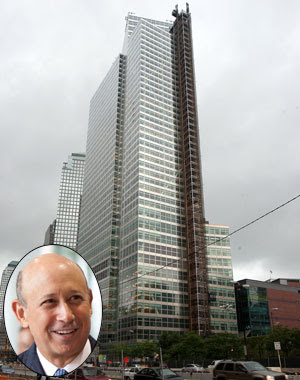 Look how out of touch Goldman Sachs is. They're building a $2.4 billion, 43 story, new world headquarters building in Battery Park.

They got NY City to provide them with $1.65 billion in tax-free Liberty Bonds, saving Goldman at least $9 million a year on interest payments.

Goldman then, wanted a much higher level of security; and now the city has told Goldman, that they will be scaling back the police patrol, because the state is so behind in it's infrastructure plans, that they don't have enough NYPD cops, and the security isn't necessary, because of all the other building delays.

Goldman is now so p*ssed, that they want to go public with this, because they see this as a breach of contract.

So now its public.

What other hand is Goldman going to play?

PAY FOR THE SECURITY YOURSELF YOU SCUMBAGS!

Which is just what NYC is telling Goldman. Their thinking is this:

"They think that the bank will be a laughingstock if it complains about not getting enough free security, especially after Goldman has said it will pay out millions of dollars of [executive] bonuses this year despite the bad economy," a source close to the security talks said."

And Goldman Sachs then says this:

"The city and the state have an obligation to everyone who lives and works downtown and that includes us. We have the right to appropriate levels of security."

SO PAY FOR IT THEN YOURSELF!

We already bailed you folks out already!
Posted by Palmoni at 8:34 AM

Any picks for this week? I have some money sitting around and don't know what to invest in at these new highs.

Hey Goldman Sachs are hard workers and they pay their taxes.... they are entitled to police protection... nah I'm just joking, don't these guys have their own private army? hah!

But Goldman doesn't pay taxes--Last year they only paid $14 million!