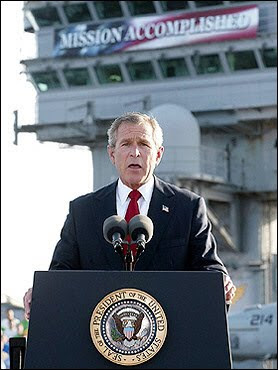 So we slap tariffs on China at 9:00 pm or so on Friday night, and now, today at lunch Obama's going to give a speech at Federal Hall on New York City on financial reform, and the successes his Administration has had on the one year anniversary of Lehman's melt?

The speech on Monday will focus on the need to take the next series of steps on financial regulatory reform to ensure that what happened a year ago doesn't happen again and cause the type of havoc we've seen in our economy.

Last Thursday, Agence France-Presse said this about the speech: "It will address the strong measures that his administration has taken to move the economy from the abyss, its commitment to reducing the role of government after their recent interventions in the financial sector, and the need for the United States and the international community to prevent the repetition of such a crisis."

The only thing missing is the aircraft carrier!

You can watch it here.
Posted by Palmoni at 7:27 AM