Check this out in the WSJ:

Maybe too many NY City building inspectors ate their dinners there! And I suppose, this will cause some NY'ers to say "Jesus, they don't take cash?"

Which is why the restaurant is on Commerce Street. Which is Barrow Street. Which used to be named Reason Street. Because when Thomas Paine died, who was living in a back room, adjacent to where the restaurant now is, the attending Doctor asked him, "Do you wish to believe that Jesus Christ is the Son of God?"

Thomas Paine's reply was, "I have no wish to believe on that subject."

And in his honor, the New York street commissioner named that street "Reason Street" after Thomas Paine and his "Age of Reason."

Trinity Church wouldn't have that, so they got the street renamed, to Barrow Street, where the cashless Commerce restaurant now stands.


During 9/11 the oldest church in NY City, St. Paul's Chapel of Trinity Church, and less than 100 yards away from the WTC site survived, without even a broken window, while the steel buildings around it crumbled and melted. 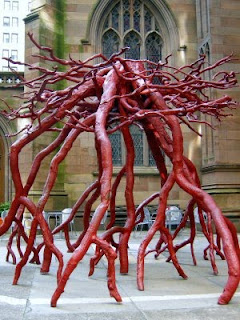 The roots of the old, rugged Sycamore tree provided the protection from the flying debris.

When the roots fell into the chapel's churchyard, it missed all the tombstones and the church.

It gave it's life for the church. It's now a bronze memorial.

For the next eight months after 9/11, Trinity Church was the home for an extraordinary volunteer relief effort, and the main memorial for 9/11 and it served as a place of rest and refuge for recovery workers at the WTC site. 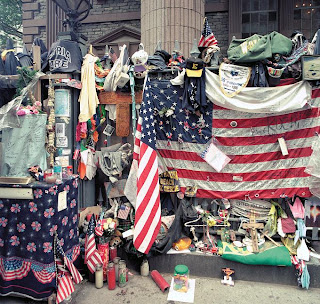 For those eight months, hundreds of volunteers worked 12 hour shifts around the clock, serving meals, making beds, counseling and praying with fire fighters, construction workers, police and others. Massage therapists, chiropractors, podiatrists and musicians also tended to their needs. 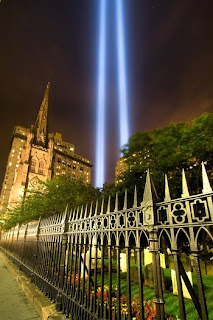 Trinity Church had their own reasons for naming Barrow street.

He was a watercolorist, that did a drawing for the church.

Commerce restaurant has its own reasons for declining cash.

Maybe they forgot that its your credit in heaven that counts.

Which never really sells, especially in this Age of Reason!

You can ask Thomas Paine!
Posted by Palmoni at 5:55 AM