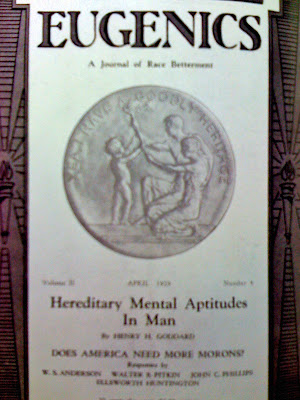 Eugenics was a serious issue in 1929. In April of 1929, in the Journal of Race Betterment, you had this story, "Does America Need More Morons?" In the March issue, the author of note was Margaret Sanger, the founder of Planned Parenthood, who was making noteworthy quotes like this: "In my experience as a trained nurse while attending persons afflicted with various and often revolting diseases, no matter what their ailments, I have never found any one so repulsive as the chronic masturbator."

I wonder what she thought about chronic speculators?

But is this the psychology today? So why compare charts from the Great Depression to now when the thinking of the world was so different?

Maybe you could say that Wall Street just seems to be full of morons because the bears are just inbred in other like minded bears research!

But before we talk in circles, we need to look at Euclid, but first you need to be set up. Because that's how Wall Street works. They always throw a diversion at you!

Remember Bolt? Usain Bolt? Who couldn't? How about his 200 meter race with the world record? Or the Olympic Gold? He's the fastest man in the world. See that's Wall Street. They set the story. And then, they give you the picture.

The setup is this. Usain is in lane 5. Look at the runners in lanes 6, 7, and 8. They get the head start since they are running on the curve. And the video isn't in English, just like Wall Street research, where they inundate you with statistics, just to make your eyes glaze over. But who needs and interpretation? We know what's happening!

So after seeing this, I now ask use a question that was in a book regarding Euclid in the 1700s.

If I give you a rope, and wrap it around the earth, like a ring wrapped around a finger, so it lies perfectly on the earth's surface, and then I lengthen the rope just 1 meter, how much slack is there now between the rope and the surface of the earth?

The answer is simple, but the solution seems wrong.

We know that circumference of a circle, with a radius R=2πR. So we need to find the gap, we'll call that g. And since we have 100 centimeters in a meter, well, the calculation is pretty straightforward. (The pi symbol on blogger looks like a n)

Which intuitively, doesn't make sense. Especially since you saw the staggered starts in Bolt's race. The average circumference of the earth is 24,883.2 miles. And if I just lengthen that rope by 1 meter, it will clear the earth by six inches around the entire earth. (At least I didn't throw in that 12 to the fifth power is 12x12x12x12x12=248832)

And that's the statistics the bears produce. Today's rope statistic is the $1.5 trillion of losses that the IMF says are still on the banks books around the world.

$1.5 trillion? The Fed guaranteed over $11 trillion worth of stuff already. The Fed lent $500 billion to people they didn't even know their name. So what's $1.5 trillion? And this $1.5 trillion loss, is $600 billion better than what the IMF said in April, because prices of the securities on the banks books have already gone up. So why don't we get that headline? Bank's unrealized losses decrease by $600 billion!

Wall Street's bearish rope isn't big enough to hang anybody, but they still throw out these stories because of the inbred bears research.

It's a moronic viewpoint of the world!
Posted by Palmoni at 8:27 AM

so the question is, who is going to repay the loses? wallstreet? ha,ha,ha. you? ha,ha,ha
answer is = currency devalution.
good luck with all your winners, if you dont switch to the right asset classes in the right time and even that cant be a save.