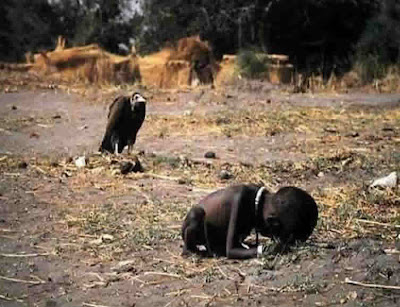 Remember this picture in 1994? It awakened the world to the poverty in Sudan.

But now we have the vultures in business. When did it become fashionable to proclaim the end of companies? Or try and usher them into bankruptcy's door?

Why do so many people relish the idea of the economy and the markets getting worse? Do they want the private equity vultures to finally be able to pounce? And make money off of everyone's else's misery? Doesn't the loss of jobs matter?

And when did the most important virtue become the P/L of the shortseller?

Why was the lady fired from Wells Fargo, who lived in the Madoff victim's house? Didn't that story resonate with the public because their was a certain "unfairness" about it? Wells Fargo was just feeding on the carrion of a Madoff victim.

But the only way the vultures leave, is when things get better. They only prey on the weak.

So Wall Street's vultures can pounce and get another meal, off of the back of the working man.

The other day, Business Insider came out with a top 10 of bankruptcy bound companies.

The story starts with this:

Despite a few green shoots in the economy and a rocketing stock market, many large companies are still struggling to avoid bankruptcy.

A new report by Audit Integrity identifies some high-profile names "that have the highest probability of declaring bankruptcy among publicly traded firms."

This story, is already six months old. When the stocks were cheap. When the vultures were circulating. These companies, are already off the critical list, and that list has just been replaced by the P/L of the shortseller.

Five of the above names were touted on this blog. Before they doubled, tripled, quintupled or octupled. Somebody had the other side of that trade. And they want out, before they face a duodectuple!

Back on April 2, I used this video with my story, "Who says this rally is fake?"

Now this time, its the journalists that are faking.

So the vultures won't feast on their friends.

Man I feel like slapping some of these news reporters myself!