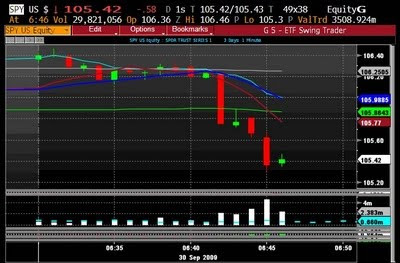 At 9:57 someone hit the market with sell orders. At 10:00 the PMI numbers came out, printing 46.1. So then the folks say the market is rolling over, when in fact, it's just another "flash" order, as Chicago PMI subscribers get this information 3 minutes before the media does.

And once again, the bears think this means something for stock prices.

It doesn't. It's just an algorithm trading against another!

Now did anyone see the clown from CoreStates Capital being interviewed on CNBC this morning? He was asked if he was worried about the jobless number. His response 2 minutes into the clip was, "Well the employment numbers don't concern me yet, since I'm still employed. If that changes, I'll be concerned."

And that my friends, is Wall Street's attitude towards the unemployment numbers Friday. And that's the video that should go viral before CNBC takes it down off of their site. Because that is Wall Street. They don't care one iota that Main Street is losing jobs. As long as they aren't!

Because when they were, they were pimping a depression. They were so bad, they couldn't of even worked for the ladies in Hungary!

So how then, is the jobless number on Friday going to mean much, when we have a GDP contraction of just .7% for Q2--Just one quarter after the quarter when the end of the world was supposed to happen?

Newsflash: How many times can you successfully bet on the end of the world? Isn't it once? So why then, would anyone believe the bears and their double dip argument? We avoided the end of the world, but now, it's going down there again? For a retest?

When was the last double dip? 1937? And then after that? 1982? So that's your bet? The one that Nouriel Roubini said was going to happen?

Wouldn't it be nice if someone could come up with one word for the double dip crowd?

I have one, but it wouldn't be polite, because it also sums up my feelings for the guy from CoreStates Capital.