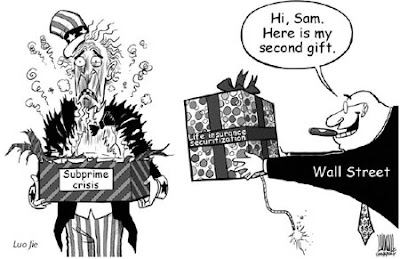 Last week we had the securitization of life insurance as the new buzzword. $26 trillion of life insurance on the sidelines, and Wall Street wants to repackage these into bonds they can hustle, while taking a piece out of them. They are looking to get $500 billion worth of these sold; convincing the public to let someone else gamble on their life.

Who would sell an insurance policy to Wall Street, that was going to be left to their heirs if they thought they were going to die?

Goldman Sachs is even creating a life settlement index, allowing people to bet on life expectancy. They probably will even hire Sarah Palin as a consultant, since she's popularized the death panel!

So now they are getting help. Look what San Franscico Fed President and CEO Janet Yellen had to say about securitization.

"Securitization is one of the great financial innovations of the last generation, it greatly expanded the market for these loans and reduced their cost. I think there is no question that securitzation of certain types of loans like subprime contributed to the crisis we had, but we have to be careful not to throw out the baby with the bath water." "Securitization markets will continue to play a major role in our financial system."

At the end of July, she had this to say to a bunch of bankers in Idaho:

The connection isn’t found in countries such as ours with advanced financial systems and independent central banks.

The United States and most other industrialized countries have central banks with long traditions of independence and deep-seated support for keeping politics out of monetary policy. In advanced countries, the problem isn’t that large deficits cause inflation. Rather it’s that they raise long-term interest rates, thereby crowding out private investment, which holds back advances in productivity and living standards.

So which is it? The so-called "independence" of the Federal Reserve that doesn't want any transparency, or the bond viligantes that force their hand?

Is it any wonder that the above cartoon showed up in China's papers?

Is it any wonder why China is buying gold?

Janet wants to sell the world some more paper!

And so does Wall Street!
Posted by Palmoni at 10:37 PM

I wonder whose going to be selling protection on the paper!! hah