The infrastructure plays pop! And shipping is on deck! 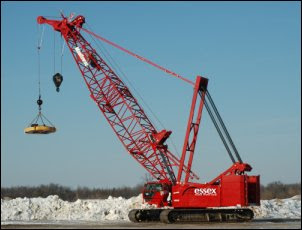 Who says you can't get it up without a crane?

On April 29, I touted these plays:

And if CAT is doing that business, how about these as a cheap derivative play on the construction recovery?

But what happened the last two weeks?

Wall Street finally woke up to these names! Sometimes you have to wait out Wall Street's games!

So here's the next play, as Wall Street has set up the con perfectly for what's coming next. And it started last week with the Daily Mail, with this picture. 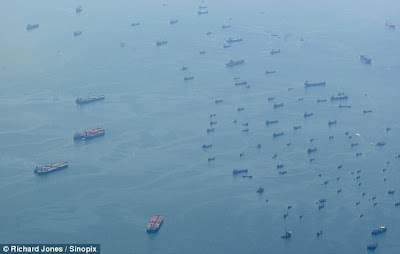 Oh my! Oh my! There is no business in the world. They've abandoned ship! And the story sounds compelling:

The tropical waters that lap the jungle shores of southern Malaysia could not be described as a paradisical shimmering turquoise. They are more of a dark, soupy green. They also carry a suspicious smell. Not that this is of any concern to the lone Indian face that has just peeped anxiously down at me from the rusting deck of a towering container ship; he is more disturbed by the fact that I may be a pirate, which, right now, on top of everything else, is the last thing he needs... It is so far off the beaten track that nobody ever really comes close, which is why these ships are here. The world's ship owners and government economists would prefer you not to see this symbol of the depths of the plague still crippling the world's economies.
----
And then to finish the story off, they show the empty cranes at Singapore. 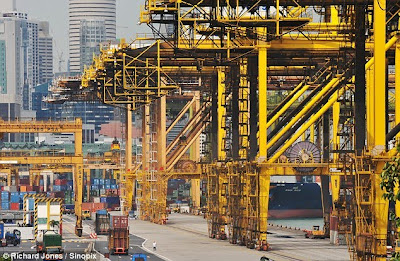 Oh my. Singapore can't get it up with a crane! Just like Wall Street!

Then the ever loquacious, but never prescient Zero Edge, picked up on the story. And they did their "own work." Channel checks if you will. And this is what they came up with. 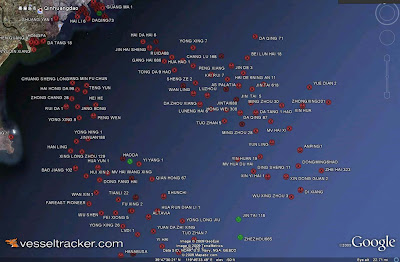 This is Qinhungadao, off of the Chinese coast. The red ships are idle. Oh My! Trade is collapsing!

Qinhungado is China's largest coal-transport port, yet coal prices are rising and stockpiles are dropping. Why would that happen? And didn't we just hear that China had its best shipping in July since September?

Or maybe, was it because there was an increase in coal that had been shipped by rail, and that the stormy seas had prevented ships from being loaded!

But that wouldn't fit in with Zero Edge's thesis of Armageddon. And neither did this, the action in the port of Gibraltar. 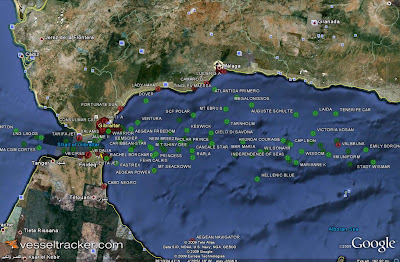 Meanwhile, the play is to ignore both stories, and especially ignore Zero Edge, and instead, buy the shipping stocks.

Because would Wall Street really tell you to buy these plays at the lows?

So once again, we have a play with Excel Maritime (EXM 7.52), Eagle Bulk Shipping (EGLE 5.76) and Paragon Shipping (PRGN 4.41) which has raised money previously with an ATM for 10 million shares at a $4.26 average price, and they could still work through another 10 million shares. The completetion of that would make the stock a wonderful play.

But what if shipping was as dead as the bears wanted to portray it? Wouldn't it then behoove you to buy at these depressed prices? Before the turn?

So either you buy at today's depressed prices, or you buy because the economy is turning upwards, as all the stock markets of the world indicate.

So why, then isn't Wall Street telling you to buy?