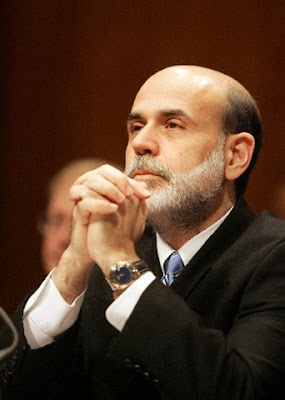 What? A positive headline in the WSJ?

It only took the priest at the Temple of the Federal Reserve to do it!

Federal Reserve Chairman Ben Bernanke said Tuesday that the recession was "very likely over," as consumers showed some of the first tangible signs of spending again.

Mr. Bernanke, who had become cautiously more upbeat in recent weeks amid signs of third-quarter growth, said for the first time that forecasters agree "at this point that we are in a recovery."

Back in June, when the bears pressed their bets, trying to make the market roll over, I alluded to these folks, as "the jawbone of the ass" in my piece, The Book of Lies.

Now the bears, arch enemy, Bernanke is pontificating positively about the economy.

And they don't have any kryptonite left.

Just the "jawboning of an ass!" And they're not Sampson.

So the market moves up in their face again!

Despite how they warned us that September was going to be such a "cruel" month.

After they previously said, "Sell in May and go away!"