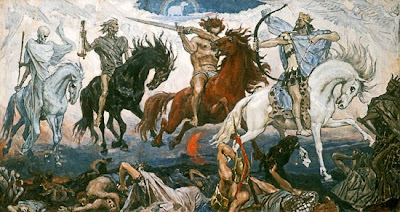 So we had the break-out yesterday in AAPL and AMZN and GOOG, the four horseman of the NASDAQ.

Which means you need to re-read this piece, but I'll put out a piece of it below. Of course, nobody then, thought the NASDAQ would end the year up over40%, and most of the bears in May were still looking for a pullback!

Bill Gross is so stuck in mortgages that he couldn't even grasp that concept, even though there's a better than 40% chance of that happening. Why hasn't that been plugged into their variables? (And before you say that's ridiculous, just look at AAPL, GOOG and RIMM and their weighting in the index, and then look at next year's earnings estimates, and add 15% to them because the analysts are too bearish--and now we have 2011 numbers that will hit in 2010, and don't those earnings deserve a higher multiple?--So where do you think stocks are heading? And you want to say that Friday was a manipulation? It was just someone getting a head start on next week's action!)
------
But now, we probably have some believers.

Now lets look at RIMM. Remember when the analysts were falling all over themselves downgrading AAPL, AMZN, GOOG, and RIMM just a few days off of the bottom? You can read about that here. And just humor me a bit, and read one of my diatribes at the market bottom by these folk.

But don't we need RIMM to go higher to get 40% on the NAZ this year that I advertised?

RIMM reports on September 24. Why wouldn't this name then run before that?

And RIMM needs to get there to get the body temperature of the shorts rising again!

It's the six degrees of seperation of the four horesman of the apocalypse that didn't happen, that supposedly was touted!

Wall Street is concerned about money, but the Apocalypse is concerned about your soul. So Providence just needed to awaken folks to this terminology so you won't be caught completely unawares or not know the story! Nothing like making you money to get someone's intereest!

Now maybe you don't like those reasons, but you're not supposed to. After all, we are on Wall Street. So use the Citi upgrade, or think that Goldman knows something about RIMM's number as your excuse.

Because if you remember, when RIMM reported in early April, before those earnings came out, Goldman had some good things to say about RIMM, which was somewhat contra then, to their general position on the economy. They had this to say today: "Remain buyers into earnings on strong demand and attractive valuation."

So now you have a reason you can run with.
Posted by Palmoni at 8:08 AM

you are insane with your numbers/divisions/multiplications/square roots

Not really insane-I was just "making" the numbers say something.

The harmonic law, or Kepler's third law of planetary motion states that "The square of the orbital period of a planet is proportional to the cube of the semi-major axis of the orbit."

So I can refine this as just raising it to the 3/4 power.

Now let's use a real life example. Jupiter is the sixth planet from the sun. Do the numbers work?

We measure astronomical distances in astronomical units. So the distance from the earth to the sun, of 93 million miles, or 149,600,000 kilometers is just 1 for simplicity.

Now remember the planetary laws? "The square of the orbital period of the planet is proportional to the cube of the semi-major axis of the orbit?"

Which coincidentally, perfectly matches Jupiter's "mercury units" from the sun.

That what makes a market! :)