Lehman to Barclays--You owe us $8 billion 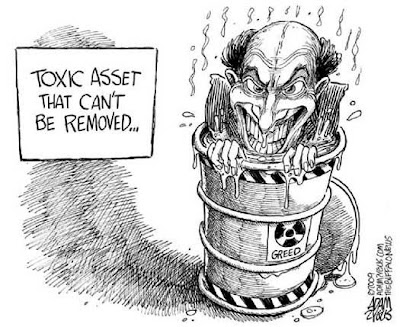 During that stressful period of time, Barclays gave Lehman $45 billion of cash, for $50 billion of highly rated paper, and Lehman supposedly was allowed to reverse this deal.

When Barclays reported their earnings, they had an over $4 billion gain on this paper, and former Lehman executives now had highly paid contracts with Barclays, which were conditioned on the closing of the sale.

Now Lehman creditors, after the fact, want some of this money back--and they've come up with a figure--$8.2 billion.

Look what Lehman had to say in their court filing:
Whether these executives acted under mistake or inadvertence, or actually knew what they were doing, the result is the same: an undisclosed, unwarranted and inequitable loss to [Lehman's] estates of many billions of dollars, and a huge financial windfall to Barclays.

So nobody knew what they were doing with $8 billion?

And that's from the "best and brightest" on Wall Street!

They just sold cash at a discount and gave it to the acquirer, in exchange for a job.

And left the toxic dreck to the bondholders!
Posted by Palmoni at 8:02 AM

I picked MYRX as a trading play, and cash in this number is over 7, and eventually the market will pay me.

DPTR looks like it is just consolidating its gains before it makes another move up.

is this a good reason to unload BCRX?

I think that was a BS disclosure and Feurstein has been a bear on the stock.