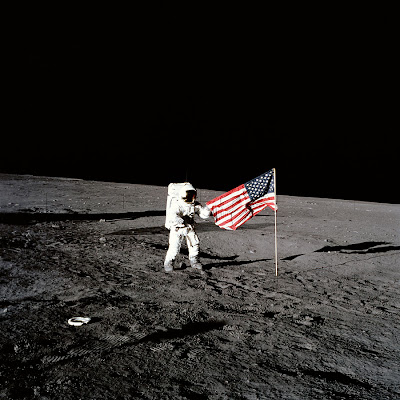 The Daily Manab Zamin, and the New Nation, two Bangladeshi newspapers published an article from the Onion, where Neil Armstrong said the moon landing was a hoax.

Here was the story they thought was real:
--------
LEBANON, OHIO—Apollo 11 mission commander and famed astronaut Neil Armstrong shocked reporters at a press conference Monday, announcing he had been convinced that his historic first step on the moon was part of an elaborate hoax orchestrated by the United States government.

According to Armstrong, he was forced to reconsider every single detail of the monumental journey after watching a few persuasive YouTube videos, and reading several blog posts on conspiracy theorist Ralph Coleman's website, OmissionControl.org.

"It only took a few hastily written paragraphs published by this passionate denier of mankind's so-called 'greatest technological achievement' for me to realize I had been living a lie, " said a visibly emotional Armstrong, addressing reporters at his home. "It has become painfully clear to me that on July 20, 1969, the Lunar Module under the control of my crew did not in fact travel 250,000 miles over eight days, touch down on the moon, and perform various experiments, ushering in a new era for humanity. Instead, the entire thing was filmed on a soundstage, most likely in New Mexico."

Apparently they don't understand satire. But they'll take your jobs! Here was their explanation:

"We've since learned that the fun site runs false and juicy reports based on a historic incident."

I thought it's a story I should mention on outsource Friday!

Anyone watch PIMCO's El Erian reaction to the job numbers this morning on CNBC? The only thing he could say good about the US is when he talked about the "Patriots."

But PIMCO's been sleeping with the Government.

We've seen who they have learned from.

Because now we know that the Chinese flag will be flying at the White House on September 20.

How's that for progress from the "Camelot" Administration?
Posted by Palmoni at 9:48 AM

Isn't PIMCO a bond fund? Why would they even want to pump equities at all? It's bad for business!

I'm wondering who is buying our bonds since interest rates are falling. You gotta be a dumbass to think the US gov't is going to pay you back 10yrs+ from now with today's dollars!!

Isn't that the conflict?

Yet they pretend it isn't!

Anybody that bought FACT and held it after your post owes you a big fat kiss on the ass.

p, you should take a poll to see how many people bought FACT after your post.