SHANGHAI -- China's government on Monday offered public encouragement to state-owned companies challenging foreign banks over huge losses from derivative contracts, a move that bankers say has raised the risks of dealing with some of China's largest enterprises.

Some of China's biggest airlines and shippers lost hundreds of millions of dollars last year on derivative trades when the price of oil plunged. They are now seeking to claw back those losses.

In a statement on its Web site, the State-owned Assets Supervision and Administration Commission said it supported moves by unnamed Chinese enterprises to seek recourse for their losses in structured financial derivative contracts tied to the price of oil and reserved the right to file lawsuits itself...

With concern already rising in recent weeks that Beijing might challenge the fuel-derivative losses, bankers have been scurrying to protect themselves. One day last week, trading in certain contracts all but shut down in China, bankers say. Now, bankers are discussing how to impose stiffer collateral requirements for Chinese airlines and other companies that seek derivative contracts.
------------

Here is the link for the English version of China's State-owned Assets Supervision and Administration Commission.

Isn't it amazing that no-one reports how Goldman Sachs screwed the Chinese? So I will! (And what is more amazing, is that Goldman Sachs reputation is so tarnished that they and the Chinese are mentioned in the same breathe!)

Goldman Sachs Singapore commodity unit, Aron & Co. was the counterparty to Shenzhen Nanshan Power Station Co., which refused to pay Goldman Sachs tens of millions of dollars. They said the transactions were unauthorize. People probably forgot about this story, because it happened last December:
--------
HONG KONG -- A face-off with a small Chinese power company over its losses on oil-related derivatives is turning into a big headache for Goldman Sachs Group Inc., a counterparty for a number of such trades in China.

Arguing that the transactions with the Wall Street firm were "unauthorized," Shenzhen Nanshan Power Station Co. is refusing to pay Goldman for the losses it has incurred, which people familiar with the situation said amount to tens of millions of dollars.

The sum at stake is small compared with losses at some other companies that hedged their oil exposure, but the downside could be significant for Goldman. Its Singapore commodities unit, J. Aron & Co., has acted as counterparty for several Chinese companies that are claiming bigger losses from oil hedging, including Air China Ltd. and China Eastern Airlines Corp. Although these companies aren't disputing their recent losses, offering Shenzhen Nanshan a break could set a precedent for Goldman if ever confronted in the future by other corporate clients.
-----

Notice what Goldman Sachs had to say: "We are confident that these contracts are valid, and that we will reach a resolution with the company." 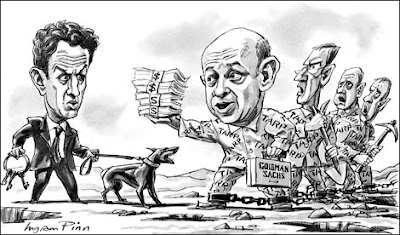 Goldman never fesses up, until they are forced to. Now the Forbes article indicates that China Eastern Airlines had a loss of $906 million. Their counterparty? Goldman Sachs.

A few days ago, I had a story on this blog called Conspiracy Theory. Part of my postulation was that Goldman was pimping oil prices higher, because they knew they were the counterparty on bad derivative transactions.

Now we know that they are the party of bad derivative transactions.

And we also know, the Goldman had pimped oil down, after they facilitated the transactions, but they pimped oil up, before they sold them. Now we know that Goldman is pimping oil up, coincidentally, at the same time, they are facing billions of losses from soured derivative transactions.

When AIG's bets went sour, Goldman Sachs was paid back by Treasury, and you the taxpayer, paid Goldman Sachs back at the behest of Treasury. 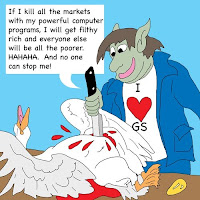 So China should go and tell Goldman to go and f*ck themselves. Let Goldman sell the futures and hedges on the exchange to drive down the price of oil, and give the taxpayer a break.

And what does it say about financial markets, when we have to turn to the Chinese, in order to reign in Goldman Sachs and their unbridled greed and egregiousness?

Maybe because China has the world's largest bird nest!

Is this why oil prices have came down a couple bucks the past few days?? So Goldman and friends are dumping their oil contracts in order to limit their losses on doing business with the Chinese?

I don't understand why these airline companies even hedged oil at the high prices?? When oil reaches a point, the entire airline industry is history anyways...

Goldman helped UAL hedge oil at over $127 a barrell!

I bet Goldman didn't even buy the oil to store to deliver to these firms, haha!

is GCI still a buy? low 8s right now or is the run over?

Breaking a contract on a hedge is never a good thing and shouldn't be condoned or celebrated. Not even when goldman is going to get a well deserved two by four up the ass.

Nobody forced any retard to put on a long oil "hedge" at $100plus. Look up the term "hedgulation".
We're all grown ups here, and the chinese are historically decent traders. If they fucked up this time, tough shit. Panic has consequences.
You either believe in free will and free markets, or you don't.

I don't think that it's as clear as that. Whatvwechave found out is that the investment banks have made a habit of using asymetrical information in their derivative pricing. I'd like to see, just for once what happens when one of these guys decide to back out of their contracts. We always hear that it wil be the end of the world. I just don't think it will be. And if Goldman is the guinea pig so what. Maybe they should know their customers better. But really, isn't China just barking on this issue? They never show their cards when they are playing poker

I bought more GCI Friday at the close option monster advertised huge buying of puts in GCI FRiday as smart money betting on weakness in that number. I'm not buying that poker hand either

what's your target of GCI?

Like I said, I couldn't care less about Goldman. But I like to see contracts upheld. Just look at your post today about the Mexicans--they obviously played this right. If their counterparties were trying to stiff them, that would be wrong as well.
The fact is, 'asymetric info' aside, when you are putting on a collar, you either like the offered price/range or you don't. If not, don't do the trade. Walking on it afterward isn't good for markets at all.