A tale of two helicopters 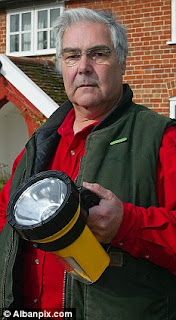 Last month, an RAF Apache helicopter lands outside Torben Merriott's house. He uses a flashlight to look at the commotion. He called the Ministry of Defence complaint line.

Three weeks later, he gets a knock on his door, and he was arrested, on suspicion of endangering an aircraft by dazzling the pilot.

He told the press, "Don’t tell the Taliban that all they need is an eight-quid torch to bring down multi-million-pound high-tech gunships."

Maybe he should send some lights over to Rio, as a helicopter was gunned down by drug gangs, along with 12 people, and two drug traffickers.

Maybe they didn't get the memo.

All you need to do is shine a flashlight!