PIMCO's El-Erian said that stocks had "hit a wall" last month. So much for that. But now, someone has found a new wall--And its a wall of cash!

Oct. 7 (Bloomberg) -- The global recovery in stock markets will stretch into 2010 as people try to make more money than they can from cash and government bonds, according to the investment chief of Scotland’s largest money manager.

“There is a wall of cash out there seeking income-earning assets,” Anne Richards, who oversees 129 billion pounds ($207 billion) at Aberdeen Asset Management Plc, said in an interview at the company’s offices in Edinburgh. “That wall of money will be supportive into next year.” 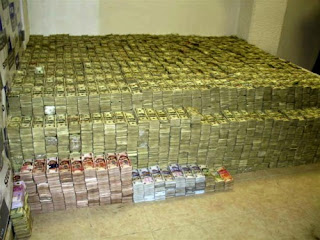 And that's what happens when you get higher prices. People will change their arguments or discredit those on the other side, when the market shows the folly of their belief.

But only after it happens!
Posted by Palmoni at 8:37 AM