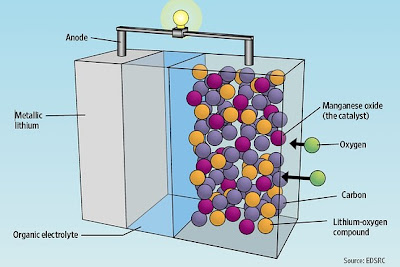 In a lithium-air battery, oxygen flows through a porous carbon cathode and combines with lithium ions from a lithium-metal anode in the presence of an electrolyte, producing an electric charge. The reaction is aided by a catalyst, such as manganese oxide, to improve capacity.

Tonight the WSJ had a story on five technologies that could "change everything." One of them is advanced car batteries:

Lithium-ion batteries, common in laptops, are favored for next-generation plug-in hybrids and electric vehicles. They're more powerful than other auto batteries, but they're expensive and still don't go far on a charge; the Chevy Volt, a plug-in hybrid coming next year, can run about 40 miles on batteries alone. Ideally, electric cars will get closer to 400 miles on a charge. While improvements are possible, lithium-ion's potential is limited.

One alternative, lithium-air, promises 10 times the performance of lithium-ion batteries and could deliver about the same amount of energy, pound for pound, as gasoline. A lithium-air battery pulls oxygen from the air for its charge, so the device can be smaller and more lightweight. A handful of labs are working on the technology, but scientists think that without a breakthrough they could be a decade away from commercialization.
------

(Update 10/19/09 8:52 am. He touted BHWX this morning because of a massive PR campaign--don't use the info on Rodinia Minerals now)
Rodinia Minerals is an Internet stock spec touted that I believe will be pumped tomorrow morning at 9:00 am EST by Richard Fisher. This isn't a recommendation on the stock, but just a reporting of what someone else is saying who is very promotional. And he will tout a triple on this play in the next five days, including a massive email blast.

In Clayton Valley, Nevada there are large underground reserves of Lithium, which is the natural resource needed for these batteries. Most of the world's lithium is usually mined from South Africa. Rodinia Minerals, the company that I believe he will be touting, uses evaporation ponds to purify the lithium brine, before it mines them, in Nevada. Clayton Valley has been touted as the Saudia Arabia of Lithium.

And the company I believe that he will tout  is Rodinia Minerals, which trades on the Toronto Exchange. Here's the company's story in a slide presentation.

Tomorrow morning, the "Internet stock spec touted" link will be replaced by the stock he is touting at 9:00 am EST.

And that just means the WSJ missed the sixth disruptive technology.

The marketing, excuse me, "touting" of penny stocks over the Internet--again!!
Posted by Palmoni at 6:44 PM

I'm assuming this is more than just a hunch, right? :D

are u buying RM?

u think aone stil has legs?

I'll be playing the spec, and the pump/tout because I think it will get some play.

So are you playing BHWX now? How high can this go? And what happened to RM.V?

RM.V would of flown--since he is a good promoter--so I'm left at the altar here