Did the Federal Reserve cheat other Lehman creditors? 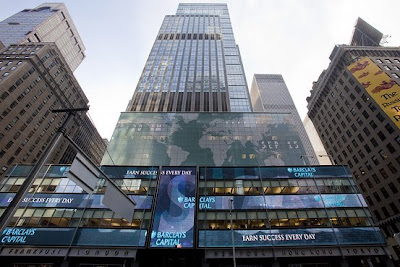 Well, that's what they are looking at now.

$46 billion came out of Lehman's coffer into the Federal Reserve's pocket before any of Lehman's other creditors were paid. And Lehman, had Timothy Geithner's stooges poring over Lehman's books since May of 2008, and when Geithner was the head of the FRBNY, he said in regard to Lehman, that the "Fed only lends to solvent institutions."

Billing records filed with the court show the examiner is investigating an issue that has angered many of Lehman's creditors: how the Federal Reserve and the New York Fed -- which lent Lehman $46 billion in cash and securities before its bankruptcy filing last September -- were paid promptly and in full, while tens of billions of dollars in other debts were left to be sorted out in court. It remains unclear when and how much Lehman creditors will be repaid...

Details on the examiner's work remain scant, and it is possible no actions will be brought. Should the examiner determine that the Fed got preferential treatment, bankruptcy administrators could pursue court claims to recover assets for Lehman's creditors from the Fed, on the theory those assets should have remained with Lehman when it filed for bankruptcy last September...

One Lehman creditor said the concern is "whether the government used its power and influence to make sure it got paid back in full, while the rest of us get dimes on the dollar."

The requests for payment show the court examiner researching what are called "preference" claims against the Fed.

Preference claims attempt to claw back assets a company moved shortly before filing for Chapter 11, said Cravath's Mr. Levin. Such moves, if made within 90 days of a bankruptcy filing, are deemed to "prefer" one creditor over others. The bankruptcy code dictates that such value should be moved back to the bankruptcy estate, to be shared among all creditors.

Billing records for Jenner & Block and its financial adviser Duff & Phelps, make numerous references to investigating "possible claims against Federal Government," the Federal Reserve and the New York. Fed. Most of that research relates to "avoidance" claims.

But why wouldn't the Fed be in on the cheat? Didn't Barclays steamroll Lehman for an extra $8 billion?

And how about when Secretary Paulson, and Timothy Geithner and Bernanke pressured John Mack to sell Morgan Stanley to JP Morgan for a $1?

Why did they want to do that?

Maybe that's why Lehman creditors are also looking for a claim against JP Morgan.

And which is why the Federal Reserve was threatening that their would be a "run on banks" if they had to comply with a freedom of information acts requests, or if the Fed would tell who gets their money, or if we have an audit of this sacred temple. (HR 1207)

Which is why Congressman Grayson, has come up with these zingers about the Federal Reserve: