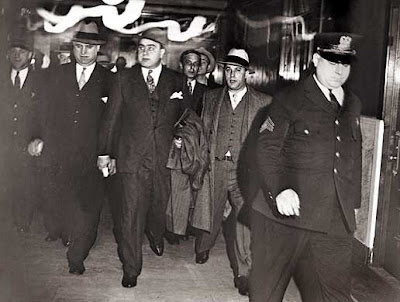 What are the shortsellers going to do, now that the market is burying them?

They could just try an follow Al Capone's lead. After all, weren't these shortsellers gangsters, engaged in their own criminal enterprises?

In the book Capone, by Laurence Bergreen, in chapter 11, Circles of Hell, fight promotor "Doc" Kearns visited Capone in the joint, with an idea to rehabilitate Capone:

"You'd be sensational as an evangelist. You know this here Billy Sunday? If he can be an evangelist, why not you?"

"I ain't knocking you Al, I'm your friend. If they stick you in the big house you'd have lots of time to study the Bible. I'd take you on a tour, and you'd be a national hero."

For Christ's sake," Capone protested, "I'm a national hero now. Maybe not a hero, but they know Capone everywhere--you can get a bundle on that."

Capone left prison broken, and a captive of his own circumstances who became progressively more delusional until he died of syphilis.

And we're already seeing that delusion! Look at Joe Weisenthal's comments today. He proclaimed the death of the bull market a dozen times, but now today, with the Dow above 10,000 he says this:

We did it! After wavering above and below the totally psychological level all day, the Dow closed at 10,017, with a gain of 145.

Now granted, he's a journalist. But if he's already that delusional, what in the name of God is going through the mind of those who are actually short stocks?

What would Al do?

Even if its just an hour after the market opens!
Posted by Palmoni at 9:47 PM

Priceless! He could be a Roubini + Rosie cousin

Couldn't even get off the floor!