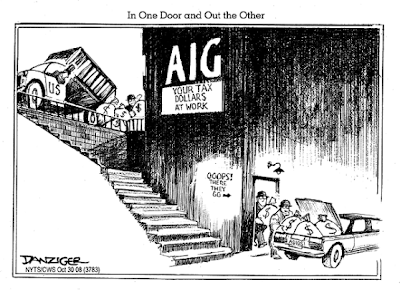 Neil Barofsky will be in front of  Rep. Edolphus Towns from NY, the Chairman of the House Oversight and Government Reform Committee today.  He will argue that the $198 million in retention bonuses are just another scam.

What wasn't with AIG?

But now he has "prooof" that these bonuses weren't retention payments for the best and the brightest because it wasn't just AIGFP people that were bonused. If you worked in AIG's kitchen, they gave you a bonus of $7,000. File administrators got $700.

This led corporate governance expert Charles Elson to come up with this thesis:

"It is odd for a kitchen assistant to receive a retention award. If everyone receives a retention bonus, it makes you wonder what the point of the programme is."

So now we have this insufferable conclusion. It took a bonus to a kitchen assistant to prove that AIG's bonuses were scams.

That's Government work for you!

Lose $200 billion and you are still one of the best and the brightest.

But if you bonus a kitchen worker, the lightbulb goes off in someone heads that maybe AIG workers were just in it for the money!

And they didn't really didn't know what the heck they were doing!
Posted by Palmoni at 5:53 AM