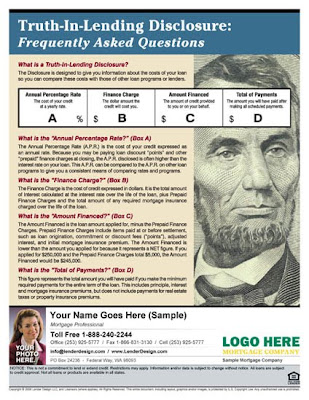 You punch in a pin number, and you select "debit" but the bank says it's a credit if you don't have the money in your account; especially after they manipulate the transactions to charge you more fees!

Throw in the extra $11 billion of fees when the bank bounces your check, and now you see the real profit centers at banks. Especially for those that offer "free" checking accounts with no "strings" attached!

In 2005, the Federal Reserve ruled that overdraft fees were not included in the Truth in Lending Act.

Which meant the equivalent interest rate of fees and the permission to sign up the consumer did not need to be disclosed.

Then banks found that if they re-arrange the transactions on a debit card, they could get more fees; supposedly helping the cash strapped consumers by not rejecting the larger payment.

Here is a real life example in today's NY Times:

When Peter Means returned to graduate school after a career as a civil servant, he turned to a debit card to help him spend his money more carefully. So he was stunned when his bank charged him seven $34 fees to cover seven purchases when there was not enough cash in his account, notifying him only afterward. He paid $4.14 for a coffee at Starbucks — and a $34 fee. He got the $6.50 student discount at the movie theater — but no discount on the $34 fee. He paid $6.76 at Lowe’s for screws — and yet another $34 fee. All told, he owed $238 in extra charges for just a day’s worth of activity. Mr. Means, who is 59 and lives in Colorado, figured employees at his bank, Wells Fargo, would show some mercy since each purchase was less than $12. In addition, a deposit from a few days earlier would have covered everything had it not taken days to clear. But they would not budge.

So who is paying these fees? Those that cannot afford them. 93% of all overdraft fees come from 14% of bank customers, who have been hit at least with fees five times or more in the year. Studies have shown that these fees are borne out by the poor.

In the example above, Mr. Means went to the bank to complain. The Wells Fargo rep told him that she couldn't waive the fee because she had already done that for too many customers.

So instead of waiving his fees, Wells Fargo gets a front page article in the NY Times.

And Wachovia, who Wells Fargo bought, now has a lawsuit for re-arranging fees.
Posted by Palmoni at 5:14 AM