All these bears continually search for the next straw man.

Look what Roubini said in Italy today: "If markets were to believe, and I’m not saying it’s likely, that inflation is going to be the route that the U.S. is going to take to resolve this problem, then you could have a crash of the value of the dollar.” “The value of the dollar over time has to fall on a trade-weighted basis, but not necessarily relative to euro and yen.”

Almost four months ago, Roubini said the dollar was going to be replaced by the renmimbi:

The British pound, the Japanese yen and the Swiss franc remain minor reserve currencies, as those countries are not major powers. Gold is still a barbaric relic whose value rises only when inflation is high. The euro is hobbled by concerns about the long-term viability of the European Monetary Union. That leaves the renminbi.

Now since that didn't happen, or his stock market calls, or the Great Depression he promised, he now touts a crash of the dollar.

You want a crash?

How about the crash of Roubini's forecasting!

All you need to do is take a closer look at his story! 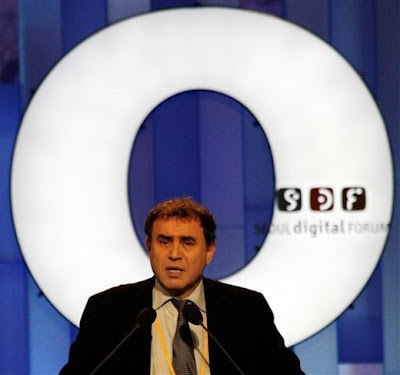 And then you are just left with a big ZERO!
Posted by Palmoni at 7:28 PM

Roubini needs to go back and re-read Ricardo...and then realize that his value is about to be lumped in with "brush land".

That's probably too obscure to make sense to a lot people.

or instead of saying "obscure" you could say "scarce" and then those in the know would know!