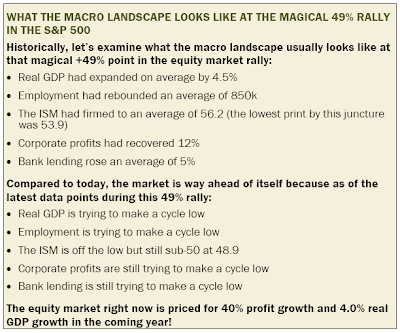 Check out his latest arguments:

Presently, it is still unclear whether or not we are going to necessarily undergo this correction — so many times in this bear market rally buyers have come in after the type of giveback we have endured, which has been just 3.2% thus far from the 1,030.89 interim peak on August 27. A break below the most recent low of 979.73 back on August 17 would probably be very meaningful in this sense, and again, what is different this time is that we just came off a week with some new information — Mr. Market is no longer rallying on good news. And, this is exactly what the tell-tale sign was back in 2002, when after a huge rally, the S&P 500 failed to rise on the day that the ISM broke above 52.0 as it did yesterday (when the March 2002 data were released on April 1 of that year) — that was an early sign to take profits because the market slid more than 30% over the next six months.

Besides the VIX index being at its highest level since July 9, Baa spreads have stopped tightening and have widened back to levels seen a month ago.
------------------

The VIX should increase. For once, people have profits to protect. But the story that will be bandied about is that the market can't rally on good news.

So far that is correct, but Rosenberg always spins the latest "data point."

The chart above is from Rosenberg's work on August 11, and since the market has just churned since then, I'd thought I throw some more of his work up, to go with his latest piece.

At least that way, you'd have a look inside the head of one of the more erudite bears.

And then you can read this, about the "Failure Caucus" in the latest Newsweek.

Most Americans have a lot riding on the success of the government's efforts to pull the U.S. economy out of its ditch: individual investors, bankers, Federal Reserve Chairman Ben Bernanke, Democratic politicians, and taxpayers. A somewhat smaller group has a lot riding on the failure of these efforts....

Vindicated bears
A small group of analysts, economists, and journalists accurately predicted the financial apocalypse of 2008. As a result, their reputations have justly been enhanced. The vindicated bears are generally suspicious of the recent turnaround efforts, because they believe that the excesses that caused the problems have yet to be worked off.

I don't think Rosenberg has an agenda, but a lot of people bearish do.

And that point needs to be considered.
Posted by Palmoni at 5:58 PM