Barron's sees something in the market 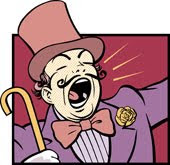 Barron's fall outlook on stocks has this commentary:

Replacing duds like General Motors with more robust companies on indexes also adds roughly $7 of earnings per share to S&P operating profits. Thanks to such changes, the S&P's book value per share has increased $40 from the market bottom, to about $495 -- and could rise further as profits swell...

That was profound--you only had that statement here three months ago:

So why should General Motors reduce the earnings in the S&P 500 in the first quarter by $6 billion when it only has a $500 million market cap?

Now let's take another look at the S&P and funky math. Didn't AAPL make $1.2 billion for the latest quarter? A few hundred million for Amazon? A half a billion for RIMM? $1.6 billion for GOOG? $3.5 billion between them? Now let's throw in GM's quarter. They lost $6 billion. OMG--The PE on these combined companies is infinity! They're losing money!! The sky is falling! The S&P is heading down! Once again, that will be a cold day in hell!

Barron's then has this to say:

The group forecasts S&P 500 companies will earn a weighted average of $72 a share next year.

Now that is fine and dandy to put that in print now, after we have had over a 50% rally. Where were they before the rally? That's right. They were bearish.

And now we have analyst targets right around 1050ish or so, and Barron's pretends these were their numbers.

Once again, we have "Who wants to be a millionaire" math on Wall Street!

Despite what the carnival barkers at barron's says!
Posted by Palmoni at 9:33 AM

I was talking to a friend that trades futures only, and he said that in his crowd there is a lot of talk about M1 and M3 (money)
analysis saying that there is another Lehman out there about to come out. I pushed him and I said:

GS - whatever, no way
WFC - they were golden sperm lenders and always will be; probably had a case of "what the hell did we buy" when they got deep in Wachovia, but not enough to nuke them.
JPM - no way, they bailed on the trash in 2007 ahead of everybody else; WAMU had crap, but they got the got out of jail free card from the Fed.
BAC - too big, no way in hell; besides, if they implode the only choice is to stock pile your ammo, money is worthless in Mad Max world.
Citi - their books are probably 10x worse than what they show, but they have the golden Fed ticket so they get to bury it until things shake out to the upside.

So who else could it be? I am not buying it, but apparently this was the big rumor that started to float in the early AM on Monday and the futures turned down in unison with follow thru all day. Seems like a lot of the "smart" money (I hate that phrase) is pissed that they missed the ride up and is now looking to force a pullback to get back in, and so be it if rumors are what it takes.

The semiconductor stocks are telling a big story right now. They are all giving positive upward guidance, and not by small amounts, but game changing numbers. I put a lot to the side in cash about a week ago, and now I am in thinking mode. This window of ridiculous returns opportunity is going to come to an end soon, and then we are back to trading on earnings. I don't want to look back a year from now and think that I missed an additional 500% because I became one of them, but I started to think that way last week. Good thing it is a long weekend.

Sorry. Hit it twice. Can you delete the double entry for me.

RE: Monday above, I meant Tuesday AM, Monday night.