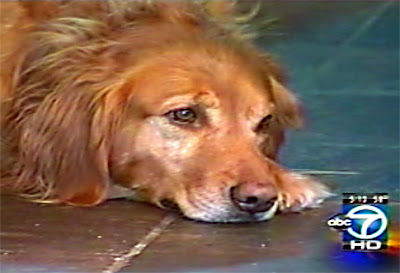 A golden retriever swallowed a three-carat diamond inside a Rockville, Md., jewelry store, taking a $20,000 bite out of the business' inventory.

The dog-eat-gem story dates to late January, when the owners of Robert Bernard Jewelry were examining the big rock brought in by a diamond dealer.

Co-owner George Kaufman, as he usually did, brought his dog Soli to the store with him.

The diamond was accidentally dropped to the store floor, with Soli sucking down the pricey snack before Kaufman or partner Robert Rosin could react.

"You saw Soli go for the diamond - gobbled it up," Rosin told WJLA-TV. "Tried to pull it out of his mouth, couldn't get it. Gone."

Once the initial panic passed, the owners brought Soli to a veterinarian - who advised them to let nature take it course.

Three days later, the dog and the owners were relieved when the diamond reappeared during Soli's daily walk.

"It was a happy ending to say the least," Kaufmann told the television station.
Posted by Palmoni at 5:20 PM