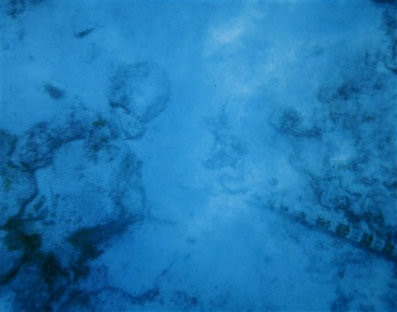 At least that's what someone thinks.

Patti Muldowney was busy snapping pictures of colorful fish during her snorkeling dive off the coast of Aruba last fall. She didn't notice what else was on the sea floor.

"We only discovered it after we got the film developed," the 62-year-old Rapho Township woman said.

Flipping through the prints in December, the Muldowneys realized Patti had photographed more than just underwater scenery.

One picture appears to show a human skeleton.

"You can see a fish. You can see some rocks. And then you can see this body lying on its back, facing up," said her husband, John Muldowney.

"I showed my doctor," John Muldowney said. "He said it looks like it's weighted down with some rocks."

Skeleton. Aruba. Could it be? The Muldowneys wonder.
Posted by Palmoni at 9:37 PM

Or maybe its just a collection of rocks.
With the human mind characteristic of trying to find reasoned images within a mishmash photo, its most likely nothing but the sea floor.

Also, how long do bones last in salt water?? Seems to me, not too long.

Even if the bones lasted for the last 5 years, they wouldn't be articulated like that anymore. HELLO!