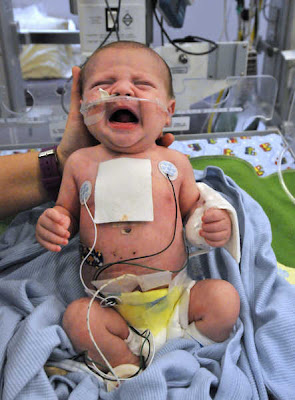 The insurance company would rather let the baby die, than pay for the surgery, because these companies are always so magnanimous.

At birth, Houston Tracy let out a single loud cry before his father cut the cord and handed him to a nurse.

Instantly, Doug Tracy knew something was wrong with his son.

"He wasn't turning pink fast enough," Tracy said. "When they listened to his chest, they realized he had an issue."

That turned out to be d-transposition of the great arteries, a defect in which the two major vessels that carry blood away from the heart are reversed. The condition causes babies to turn blue.

Surgery would correct it, but within days of Houston's birth March 15, Tracy learned that his application for health insurance to cover his son had been denied. The reason: a pre-existing condition.

"How can he have a pre-existing condition if the baby didn't exist until now?" Tracy asked.

New federal legislation that will prevent insurance companies from denying children coverage based on a pre-existing condition comes too late for the Tracys. The legislation, passed by Congress and signed by President Barack Obama this week, won't go into effect until September.

But Houston, who is hospitalized at Cook Children's Medical Center in Fort Worth, needs coverage now.

Without surgery, babies with this condition often die soon after birth, although some may live as long as a year, said Dr. Steve Muyskens, a pediatric cardiologist. 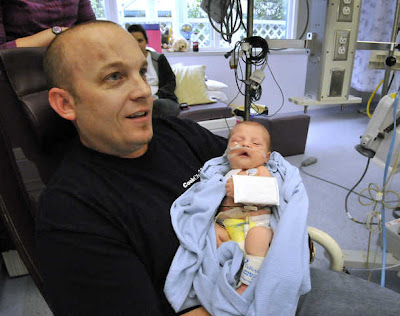 The insurance companies needed to be forced under ObamaCare because they always put profits in front of the good of society.

And if it is a pre-existing condition, then doesn't that make the fetus a baby?
Posted by Palmoni at 5:28 PM

Yeah that makes the fetus a human being!

I was not for national insurance but in the last 5 years, I revised my viewpoint.

Allowing people to be gamed by for profit cos is just wrong.
Add to that, the prospect of premiums wildly outrunning anyones ability to pay the increases. The compounding effect of 10% per yr increases turns todays policy into a black hole for peoples modest incomes.

Enough. The rest of the world doesn't allow their populations to be dumped by some capitalist group, why should we.

I was very against obama care. The plan doesn’t address rising costs. It also adds people to the pool who have never had insurance. Many of these will be the unprofitable, so the cost for others will rise. As the other commenter said, premiums are getting out of control. How will obamacare help that? I think denying care for that baby is awful. But how has obamacare helped them? Sure, maybe the Tracy’s baby could have been helped. But if the cost of the procedure the baby needs is 100K, then how can they call the insurance company and immediately get 100K cash for a premium that may earn the company 1000/month. If the insurance company took exception this time, its obvious they can’t pay out much more than they take in continually.


How has Obamacare addressed this? How is it not going to substantially increase cost as everybody games the system and just buys insurance when they need it. I.E when they feel the can get more buy owning it than not? You can't be denied now.

Yes I pay my own insurance, yes I have a preexisting condition that’s hard/expensive to cover. My premiums have been growing a lot for years, so no I’m not happy with status quo.

Everything that the punditry has exclaimed would be disastrous for the economy has been proven wrong.

And all my right wing friends warn me that ObamaCare will be a disaster. I differ, just as I differ from my bearish friends who warned me all the way up.

I think we get a massive bull market in stocks with ObamaCare thrown in.

And very rarely do I find a whole lot of stuff in Barron's that I can agree with, but they said this quote tongue in cheek, but I think it hits the nail on the head

HEALTH-CARE REFORM FINALLY MADE IT INTO LAW and, contrary to the received wisdom that its effects would not be felt for years, it had an immediate and enormous impact: The Republicans got sick and the Democrats got bullet-proof vests.

I think Obama has a huge win, and it won't be the disaster that everyone claims it is.

I certainly hope you’re correct. I am all in favor for everybody getting help and improving care but those goals don’t seem aligned. I am younger, early thirties, but my illness was serious and I had an even better policy then. I can’t tell you the hours I have sat on the phone in severe pain trying to get approval for CAT scans that shouldn’t cost 5K, but do. I think until you deal personally with an illness and realize how mucked up all this is, it wont sink in. I am one of the folks who gets upset, and I guess the one Barron’s is mocking, but having personally dealt with it, its very real. Obamcare is a done deal now, so hopefully it works.

Also, I think this blog is awesome, you make some great calls, and I am really thankful you share. Thank you.

Certain tenants of the health care reform were necessary, and will prove worthwhile, both in the long and short term. I've personally experienced significant health care costs without the protection afforded by insurance (hospital stay, multiple tests, specialists, etc...) that left me with $80K in bills. With that said, the approach that congress took was wrong, and their failure to adequately address two fundamental causes of our increasing health care costs (tort reform, increased competition) reeks of our "representatives" untold influences by the lawyers and insurance lobbies.

The true underlying costs of this "reform" will most likely manifest at a date long past the political lives of the arrogant fucks in office, and yeah, you may be correct with the Barron's call (I hope to hell you're not). Whatever the impact of the health care reform has on the bull market will also be fodder for the pundits, with no real gauge to measure it by - but someone will spin it, and the lemmings will believe it.

The real proof of the "success" or "failure" of this program will exist when you and I find ourselves in our 70's and 80's, living the reality of the insolvent social nets created, and being caught between the rock and hard place of a decline in overall health care quality, and our kids / grandkids being taxed at unreasonable levels to fulfill these obligations.

The principle of health care reform has been sacrificed at the altar of special interests and politics - and in the process we were able to observe our congress urinate on the constitution.

Where's the integrity of this program once you see the devil in the details?

My question - did we raise the tide, and in the process maintain the quality and increase the affordability of our health care? Or did we dilute the world's best system to political expediency? I suggest the latter, and when you consider what could of come out of health care reform against what was delivered, I find myself profoundly disappointed, and pissed off.