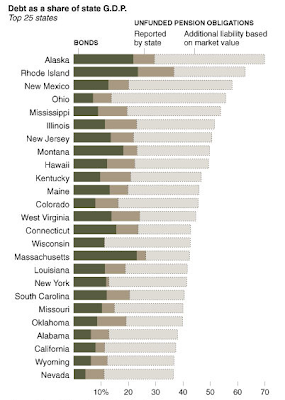 NYT
California, New York and other states are showing many of the same signs of debt overload that recently took Greece to the brink — budgets that will not balance, accounting that masks debt, the use of derivatives to plug holes, and armies of retired public workers who are counting on benefits that are proving harder and harder to pay.

And states are responding in sometimes desperate ways, raising concerns that they, too, could face a debt crisis.

New Hampshire was recently ordered by its State Supreme Court to put back $110 million that it took from a medical malpractice insurance pool to balance its budget. Colorado tried, so far unsuccessfully, to grab a $500 million surplus from Pinnacol Assurance, a state workers’ compensation insurer that was privatized in 2002. It wanted the money for its university system and seems likely to get a lesser amount, perhaps $200 million.

Connecticut has tried to issue its own accounting rules. Hawaii has inaugurated a four-day school week. California accelerated its corporate income tax this year, making companies pay 70 percent of their 2010 taxes by June 15. And many states have balanced their budgets with federal health care dollars that Congress has not yet appropriated.

Mish said, "Most states have pension plan assumptions that assume a 7% rate of return or higher. Such returns simply will not happen."

7% returns are unachievable? You can now do that in your sleep!

Even Dr. Doom, Nouriel Roubini is now out touting India: 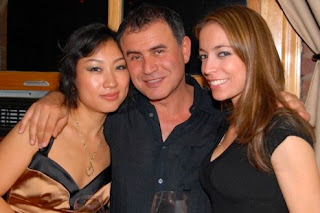 March 31 (Bloomberg) -- India has a “massive” need for capital to catch China’s growth rate and fully benefit from a global shift in economic power to emerging markets, said Nouriel Roubini, the economist who predicted the financial crisis.

“China has been a hare and India a tortoise but growth is accelerating in India,” Roubini said yesterday. “There is a massive need for both human and physical capital.” 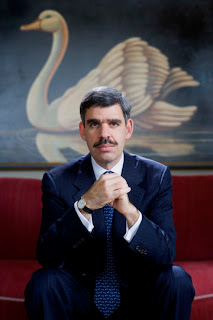 Look for growth rates to be an annualized 4 percent to 5 percent in the first half of the year. Growth will likely slow in the second half to an annualized 2 percent. Unfortunately, we will also have persistently high unemployment.

Being a Jets fan for over 40 years, I have learned not to expect too much in return for my steadfast loyalty. I combine continuous hope with timid expectations given the years of disappointments. Having said all that, I am excited about the Jets 2010 team!

Proving once again, the bears were the market's black swans!

So much so, now they are no longer pretending they were!
Posted by Palmoni at 7:52 AM

I am confused as what you think the solution to all that is? I feel like most people are out there just trading it like hot potatoes. I feel with China and all the other pumping it can definitely run for a year or more. But I am not laughing at those issues. They are real and don’t have a solution yet.


What about CCME. It hasn’t quite filled the gap after the bus advertising news. I feel like it needs just a little more pull back before the spring releases. Thoughts? Thx.

It seems like hot potatoes because there really isn't yet, a whole lot of new money sloshing into the equity market.

We are in the perpetual rotational market, that feeds itself on trading rebates!

CCME is a case in point. You had a day follow through, and now boredom. I think you're right on the stock

I don't know if this is the right place for this, but, China the hare and India the tortoise?? Does Roubini have a clue what he talks about?? China has had a slow steady climb for the past five decades. It's India that's the latecomer, and they've already declared themselves First World (isn't that a relief).

what are your thoughts with APWR?