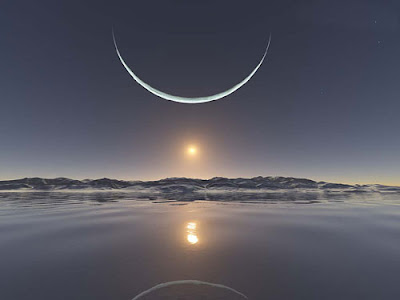 Since the surprise discovery last year of trace amounts of water on the moon, scientists have been redefining their concept of Earth's rocky neighbor. Now researchers say the water on the moon comes in three different flavors.

Until recently the moon was thought to be bone dry. But measurements in the last year from the Mini-SAR and Moon Mineralogy Mapper (M3 or "M-cubed") instruments on India's Chandrayaan-1 moon probe and from NASA's recent LCROSS mission have proved that wrong.

Mini-SAR found 40 craters, each containing frozen water at least 6.6 feet (2 meters) deep on the lunar surface – which adds up to 600 million tons of lunar ice stuff altogether. LCROSS slammed into the moon on Oct. 9, 2009 and found evidence of water in another crater.

"So far we've found three types of moon water," said Paul Spudis of the Lunar and Planetary Institute in Houston, Texas. "We have Mini-SAR's thick lenses of nearly pure crater ice, LCROSS's fluffy mix of ice crystals and dirt, and M-cube's thin layer that comes and goes all across the surface of the moon."
Posted by Palmoni at 5:54 PM

There is also the water in vapour form that ISRO's CHACE instrument found. This has been reported in Planetary and Space Science Journal. Or you can see it here