How China treats gamers that cheat 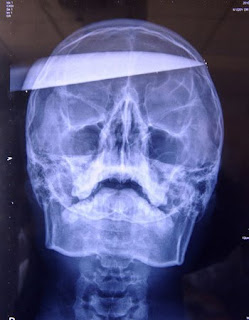 This incident took place in China’s northern province of Jilin. Gamers had gathered together in a local NetCafe to play CounterStrike, and one of them (a 17 year old) was subsequently accused of cheating. The dirty handed gaming infuriated the others in the Cafe and they attacked the offender violently. Did I say violently, because I meant ultra-violently on A Clockwork Orange scale.

You can tell from the guy's x-ray, they jammed an 11 in. knife into the cheater's skull almost to the hilt. The youth was rushed to hospital shortly after where Doctors spent nearly 10 hours in surgery to safely remove the blade (which they said was only stopped by the other side of his skull!). Apparently the gamer was using a common "Wallhack" that allowed him to see through walls, but even so jamming a knife into someone's head isn't the best way to deal with it.

(no link because the site will attempt to attack your computer)
Posted by Palmoni at 10:08 PM

Over a game of Counter Strike?? Aww that brings back memories, hah.

More than likely he died. But China won't say that.

I remember a incident on life in the e.r. show. Like this kid, a guy came in with a knife stuck in his head.
He was talking and responsive as if everything was ok.
But in a off scene chat with the Dr, the Dr said that once the knife was removed in all likely hood the guy would be dead. Way too much damage to repair within the brain once the knife is removed. It was the only thing stopping all the blood flowing out from the severed areas. The Dr was right.