FEMALE suicide bombers are being fitted with exploding breast implants which are almost impossible to detect, British spies have reportedly discovered.

It is believed the doctors have been trained at some of Britain's leading teaching hospitals before returning to their own countries to perform the surgical procedures.

MI5 has also discovered that extremists are inserting the explosives into the buttocks of some male suicide bombers.

Lethal
Terrorist expert Joseph Farah claims: "Women suicide bombers recruited by al-Qaeda are known to have had the explosives inserted in their breasts under techniques similar to breast enhancing surgery."

The lethal explosives called PETN are inserted inside plastic shapes during the operation, before the breast is then sewn up.

The discovery of these methods was made after London-educated Nigerian Umar Farouk Abdulmutallab came close to blowing up an airliner in the US on Christmas Day.

He had stuffed explosives inside his underpants.

Hours after he had failed, Britain's intelligence services began to pick up "chatter" emanating from Pakistan and Yemen that alerted MI5 to the creation of the lethal implants. 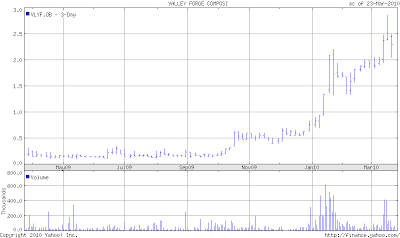 The small cap spec play on this is Valley Forge. (VLYF). I had posted a video of their  technology when it was on Fox on January 14. Here's that clip.

Their technology was developed in conjunction with Livermore Labs. The company website is here.

VLYF is looking to start sales with their cargo scanning and it looks like India and other airports are already testing their technology. That information from India comes from here:

RPM2 Inc, a New Delhi, India based company, represents Valley Forge for all VLYF related security products. They are in talks with several major airports in India as well as the Bureau of Civil Aviation in New Delhi to bring in the ODIN. Currently, discussions are ongoing with the AERB in Mumbai, for demonstration dates and for formal approval.

As with any small cap name, you need to do your own due diligence.
Posted by Palmoni at 7:37 PM