China's budget has its own accounting gimmick 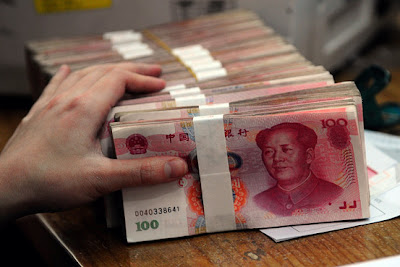 BEIJING – China's finance ministry changed the accounting for some government spending this year in a way that allowed it to report a planned budget deficit below the symbolic level of 3% of gross domestic product, an examination of budget documents shows.

In the budget report it submitted to the legislature earlier this month, China's Ministry of Finance estimated the total budget deficit for 2010 at 2.8% of GDP, "basically the same as last year." A strict cash accounting of government expenditures, however, would push the 2010 deficit up to 3.5% of forecast GDP, and reduce the 2009 deficit to 2.2% of GDP, according to calculations by The Wall Street Journal that were verified by three economists.

The accounting move simply shifts spending from one year to another, and so doesn't mean that the overall trend of China's government finances is worse than reported. Still, it raises questions about transparency, and highlights the Chinese government's desire to demonstrate strong public finances at a time when global markets are increasingly jittery about official deficits and debts. China's finance ministry has pledged to keep annual budget deficits below 3% of GDP – the same threshold that countries in the euro zone are supposed to observe.

And the other sovereigns? Look what Moody's had to say:

PARIS — The United States, Germany and other major economies have moved “substantially” closer to losing their top-notch credit ratings and can not depend solely on economic growth to save them, a report warned on Monday.

The ratings of the Aaa governments — which also include Britain, France, Spain and the Nordic countries — are currently “stable,” Moody’s Investor Service wrote in the report. But, it added, “their ‘distance-to-downgrade’ has in all cases substantially diminished.”

“Growth alone will not resolve an increasingly complicated debt equation,” Moody’s said. “Preserving debt affordability” — the ratio of interest payments to government revenues — “at levels consistent with Aaa ratings will invariably require fiscal adjustments of a magnitude that, in some cases, will test social cohesion.”

Some short hedge funds must of sent Moody's another check!
Posted by Palmoni at 8:40 AM

not much posting? traveling?