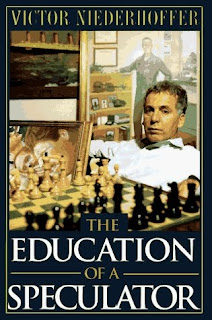 The other day Victor Neiderhoffer's  Daily Speculations website had some investment advice, that ended with this conclusion:

Always hire a pro to second you when you are playing tennis or investing. The pro makes you look good and can always win his serve and two or three points on the return of serve. It's important not to make a fool of yourself when doing something you're not so good at, as people mistakenly think your abilities in one thing are related to your abilities in another. (People, including myself, have mistakenly made that mistake about me, thinking that because I was so good at hardball squash I might be almost as good at something else).

Someone commented with these:

1. Invest in stuff you do not understand. The Complexity Premium will carry you for awhile, see Enron and Alphabet Soup of securitization for proof. In the mean time people will think you are really smart and that is why you out perform in the short term.

2. Never let someone go over your long term results. Focus on what you just bought in any analysis or comparison.

4. Blow up only when the economy stinks, that way you have a good excuse. Many decent years followed by one excusable bad year. The opposite of course can apply to hedge fund guys. Only have one spectacular year, and everybody will think you out smarted the optimist.

5. If someone models your risks and says it is too high, call the models garbage. After all nobody could model the stuff you bought.

6. Buy everything complex from your friend you played on the same intramural team in college. After all he has a McMansion and would never hurt a friend. He has great contacts, and loves being the middle man and controlling what you and your boss sees. Besides he will then take you to all the greatest golf courses when you are in town.

7. Call being in front of the herd, "herd following" and "group thinking". But bottom selling and top ticking is simply an irrational market and bad economy. If you are in front and something goes wrong, you simply look stupid. But if you get caught at the tail, nobody could have seen it coming, because everybody was doing the same thing.

8. Always be quick with a joke, but make sure it is at somebody Else's expense, not your own.

9. The better people are, the more you need to dig to find their weakness. Once it is found, make sure to define them by this problem.

10. Never win at golf, but prove your expertise in the clubhouse by knowing your liquor. Be sure to always be in the "power" group when you play and drink.

11. Make sure you are friends with your bosses mistress…you never know when you will need to call in a favor and have someone fired.

12. Control the minutes of every investment meeting, nobody reads them anyway, but it is a great way to not have to do something you do not want to, but those in charge want you too.

What a great top twelve! And since these folks like squash, I'm returning the favor as I've found a teacher for them!