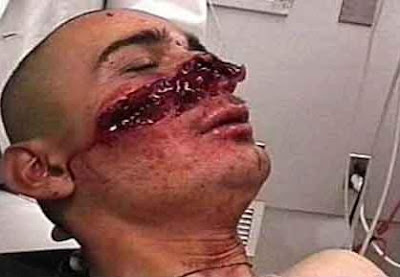 And he bills Medicaid for the most expensive parts that he substitued with the paper clips!

A former Massachusetts dentist is accused of placing paper clips instead of stainless steel posts inside the teeth of root canal patients while billing Medicaid for the more expensive parts.

Prosecutors say Clair was suspended by Medicaid in 2002. He allegedly hired other dentists for his clinic and filed claims under their numbers between August 2003 and June 2005. He's also accused of illegally prescribing drugs to staffers who returned medications to him.
Posted by Palmoni at 10:11 PM

Duuuuuuuuude a little warning befoe slapping a picture like that would be nice! I almost spit out my dinner, hah.

That's scary and the picture is just gross. Thank goodness I have just finished my root canal last week with a professional Greenville, SC dentist before seeing this picture. I couldn't probably continue with the procedure if I have seen this prior to my procedure. Anyway, I hope Michael Clair gets the sentence he deserves and that the patients are okay. I'm lucky that the Greenville, SC dentists are highly skilled and qualified professionals so I'm not worried about the quality of their treatments.

That is so unethical! I frequently visit our family dentist and upon sharing this story he immediately had this jaw-dropping expression towards an unprofessional tooth doctor. I'm lucky enough to have an expert and a ethical doctor who's about to do my dental implants. Lexington, SC is the right place for me to see a dentist.

It looks like he bit off more than he could chew! He really should take lessons on how to hold an axe! Duck next time, that bullet could have killed you..