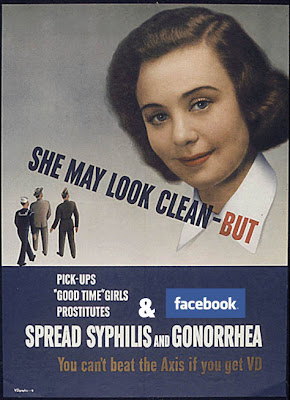 According to the Sun:

CASES of syphilis have increased four-fold in Britain's Facebook capital as users meet up for unprotected sex, it was revealed yesterday.

Figures released last month showed that people in Sunderland, Durham and Teesside were 25 per cent more likely to log on regularly.

And an NHS trust chief said Facebook and similar sites were to blame for a shocking rise in cases of potentially-lethal syphilis in the region.

Professor Peter Kelly, director of Public Health for NHS Tees, said: "There has been a four-fold increase in the number of syphilis cases detected, with more young women being affected."

He said staff had found a link to social networking sites among those infected.

we have reviewed numerous option filings by Facebook, and some of those prices of the common listed on these typically fell within a 75% to 80% discount as to the most recent round of Preferred Stock that had been issued. So, where are we going with this? The latest option filing that was filed in January 2010 priced the common at $16.17. If, and this is a big IF, we assume this price falls within a discount range applied to the pricing of some of the previous filings, this would bring the per share value of the latest round of Preferred Stock issued in May 2009 to $80.85. Using that share price and the total estimated fully diluted shares that we have calculated, this gives Facebook, Inc. a value of close to $35 BB.

With the news that "Macau To Cap Gambling Table," do you still see much upside for MGM?

I never put much credence in what Chinese officials say. They seem to negotiate in the papers, and most of this seems to be bluster.

However, I sold WYNN today as I think that has run enough for now--but I think MGM is still fine