It is still on the market, but Charles Tong, the developer of Tomson Riviera, a luxury riverfront complex in the heart of the financial district here, says he is having no trouble finding takers for similarly priced units.

Signs of exuberance are everywhere. An investor in Shanghai recently bought 54 apartments in a single day; a villa sold for $30 million last year; and in December a consortium of developers paid more than $3.5 billion for a huge tract of land in Guangzhou, one of the highest prices paid for any property, anywhere. In the city of Tianjin, in north China, developers have created a $3 billion “floating city,” a series of islands built on a natural reservoir, featuring villas, shopping malls, a water amusement park and what they say will be the world’s largest indoor ski resort.

Speculators are snapping up properties on the expectation that prices will continue to rise, as prices have nearly every year for more than a decade. And powerful developers are working with local governments to transform old cities into urban dreamscapes.

But Shanghai, China’s wealthiest and most dazzling city, is the epicenter of the boom. Prices here have risen more than 150 percent since 2003, pushing the price of a typical 1,100-square-foot apartment up to $200,000, according to real estate experts. (Shanghai residents typically earn less than $5,000 a year.)

A buying frenzy has gripped the city, leading to billion-dollar land auctions and long waiting lists.

“The speed you buy a house here is faster than you buy vegetables,” said Andy Xiang, an advertising executive who recently put down a large cash down payment to get the right to pay $1.3 million for an apartment in the city’s exclusive Xintiandi area...

Still, Tomson’s prices are soaring. The most recent apartment sold for about $2,300 a square foot. The average luxury apartment in Manhattan sold for just under $1,900 a square foot in the fourth quarter of 2009, according to Prudential Douglas Elliman real estate.

Indeed, for the price of a Tomson apartment in Shanghai, a buyer could easily purchase a 6,000-square-foot home in Los Angeles built by Frank Lloyd Wright and now for sale ($10.5 million), or a 52-acre site with a 22-room residence in New Canaan, Conn. ($24 million).

But a sales agent at Tomson Riviera says this is the future financial capital of the world, not the dying one. 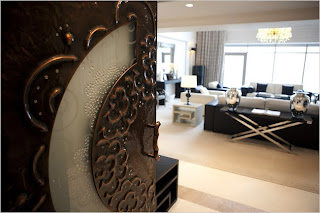 “Look at this bronze door,” said Wang Yaodong. “That costs $50,000! Look at these Gaggenau appliances. They were made in Germany.” The glasses were imported from Belgium, the Jacuzzi from Italy. And don’t worry about losing your key, he said, “This lock can read the palm of your hand.”
NYT
Posted by Palmoni at 7:40 AM

Do you not understand the concept of a bubble? Things don't just go straight up. Reference your picks on Citi and Bank of America back in '07. How quickly we forget the past.