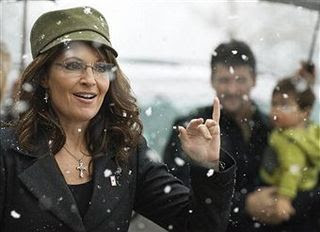 Sarah Palin, TV producer? Multiple sources confirm that Palin and uber-reality show producer Mark Burnett have been making the rounds in Hollywood this week to pitch a TV docudrama about Alaska. One source called it a “planet-Earth type look” at Palin’s home state. The former candidate for the vice presidency was seen leaving ABC today with Burnett, and an insider confirmed that she met with reality topper Mike Darnell yesterday at Fox (where she and her family ended the day by visiting American Idol. Palin stayed in the green room). She also stopped by CBS today and plans to meet with NBC Universal TV Chairman Jeff Gaspin tomorrow.

When asked about the meeting, one executive quipped, “she’s pitching a sequel to Commander in Chief,” a reference to the ABC drama from Rod Lurie that starred Geena Davis as the first female president.
Posted by Palmoni at 7:32 AM

any update on the columbian gold company...it's been trading in the low 7s now.

also...what is causing the move in CNO? eyeing it at $5 yesterday and moved up hard then it's up pretty big today

A lot of things finally cooking! More geologists working on samples, they are doing things that will help the people of Colombia--(and you need Government favor to do business down there) and they've been granted more land.

Not much longer to wait for results

what do you think the move will be...patience is amazing