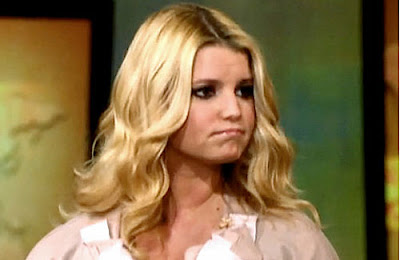 Jessica Simpson will appear on "Oprah" Wednesday (March 3) and finally speak her mind about John Mayer's Playboy interview in which he compared her to sexual "crack cocaine."

"There's nothing worse than being disappointed in somebody," Jessica says. "I'm not angry. I'm ... well, I'm a little bit angry."

When asked why, Jessica explained, "I don't want people to know how I am in bed. I mean, I guess I could have been a lot worse."

In case you forgot what John said:

Remember when she was with Nick Lachey?

What did she say about her ex-husnband? I'll remind you:

“Nick’s small package was a problem sometimes, like the first time we had sex, to tell you the truth, I didn’t really feel much, I faked the whole thing, I really felt sorry for him, I still loved him though.”
Posted by Palmoni at 5:33 PM