How many times do we have to see this crap on Wall Street? DNDN has over 10 million shares short, and they were getting squeezed. So this morning, you  had a fluff piece, from a fluff analyst, who was paid by those who were short, to come out with startling news.

Dendreon, was supposedly going to brought in front of an FDA advisory panel. The shorts sold stock under 30 in the pre-market, trying to drum up a scare.

And then Jon Najarian twittered about it: (Jon always gives breaking news--no agenda there)

"The Favus issue is pushing $DNDN down about $2.00 in the pre on our Depth Charge this am -www.trademonster.com/pt"

Adam Feurstein, then had this piece out on DNDN, after he first tried to incite a panic on Dendreon.

"We have been in contact with physicians who have been invited by the FDA to participate in an upcoming FDA Advisory Committee Panel Meeting to discuss Provenge," said Elliot Favus of Favus Institutional Research, in a note sent to institutional investor clients Tuesday morning.

The report sent Dendreon shares falling sharply in Tuesday's pre-market trading, but the stock has since recovered and is down 81 cents, or 2%, to $31.70. Investors are not expecting FDA to hold another advisory panel meeting on Provenge. The FDA will issue an approval decision on Provenge on or before May 1.

Dendreon says FDA has not given the company any indication that a Provenge panel will be scheduled, according to a Dow Jones report. The FDA has not announced plans for an advisory panel meeting.

"I think he's wrong, but even if he is right the panel voted positively last time. The data are stronger this time so I would expect another positive vote and the FDA to approve the drug so that prostate cancer patients can finally have access to this lifesaving drug," said David Miller of Biotech Stock Research, an independent biotech investment newsletter and a long-time follower of Dendreon.

Miller added that Dendreon's management, only last week, said FDA had not been in contact with the company about scheduling an advisory panel for Provenge.

Deutsche Bank biotech analyst Mark Schoenebaum also defended Dendreon this morning. "In my opinion, if a panel is called by FDA, Dendreon's stock could be down 10-20% as most didn't expect a panel. However, given the good [Provenge] survival data, my sense is that it will pass any such panel, as it passed the 2007 panel with even weaker data. So even with a panel, I think approval is likely by year-end 2010." 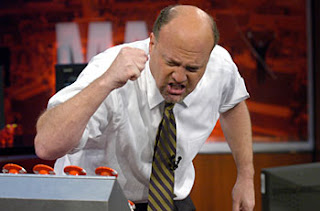 Jim Cramer then pretended that Favus was speaking holy writ as he said this:

Jim Cramer
DNDN
3/2/2010 9:59 AM EST
Dendreon is a cult stock, the most fierce cult i have ever seen. I predict that this outfit Adam writes about that said DNDN is a sell will get death threats... Body guard required. I AM NOT KIDDING

A few minutes later, we find out that the FDA says that this isn't true. The stock rallies, as those who knew the story was a plant, aggressively eat their young, buying back those shares they naked shorted, and those that they need to cover.

Here was that news:

Thirty minutes later, after this news hits, at 10:36 Mike Huckmmn breathlessly goes on CNBC and says that the FDA said that no panel meeting was going to take place. 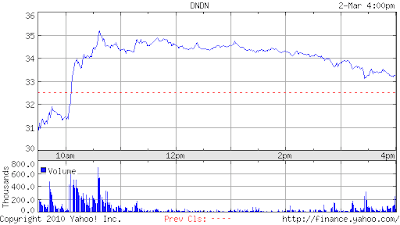 Notice how Cramer was able to completey screw anyone following his posting! Along of course, with all the other liars on the street! At 9:59 right before DNDN moves four dollars, he says it is a scam. At 10:41, when it had its move, he says it isn't!

Then 13 minutes later, at 10:54 Adam Feuerstein, who was furiously trying to create a panic earlier this morning, is now furiously backpedaling. He then changes the title of his previous hatchet job/report to Dendreon Won't Face Second FDA Panel: BioBuzz

And he then puts in the FDA comments!

But you can get revenge on all the liars on Wall Street!! Alzheimer drug company, Medivation, just broke out to a new high today. I mentioned it Sunday. And like clockwork, the stock moved five points!

Sometime, in the next couple of months, they'll give their Alzheimer data, and in my opinion, the stock should then be trading at least double from where it is now.

Take the stock, or sell some puts on this name and collect the premium!
Posted by Palmoni at 6:50 PM

The only reason the stock wasn't down $10 is because investors know the tactics of these manipulators and short sellers. Also, people have to expect more of this as the time draws near.

SAN FRANCISCO, March 2 /PRNewswire-FirstCall/ -- Medivation, Inc. (Nasdaq:MDVN - News) today announced that it will hold a teleconference and webcast at 8:30 a.m. Eastern Time tomorrow, Wednesday, March 3, to discuss Phase 3 trial results for dimebon (latrepirdine) in patients with mild-to-moderate Alzheimer's Disease. A press release will be issued at 7:30 a.m. Eastern Time tomorrow prior to this call.

I used to think cramer was just flaky in his constant flip flops. But I realized a while back, like this case, he often has motives unseen.

He cost me money untill I learned this. And like all good con artists, he mixes up some truth along with the scams to keep you guessing. Sometimes its a honest, straitforward opinion and other times its this stuff.
Best move is to tune him out along with his the street cast of cons.