Europe? Who cares? Today, it's all about China 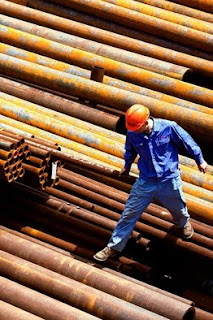 China is eating in its own reserves of commodities:

China appears to be eating into some of its commodities reserves, a potentially worrying near-term trend for commodities producers and investors, analysts said.

Barclays Capital metals analyst Natalya Naqvi wrote last week that China's decline in lead imports may "reflect some running down of domestic stocks." She estimated that China has been eating into its lead stockpiles since March.

China consumes about 40% of the world's lead, which is used primarily in making auto batteries. Since mid-April, prices for lead plunged as much as 26%, compared with an 11% decline in the Dow Jones-UBS Commodity Index.

And China's PMI has been falling:

"China's purchasing managers were less optimistic in May—another sign of moderating growth in the economy and further evidence that policymakers' cooling measures are taking their toll," Alaistair Chan, an associate economist at Moody's Economy.com, said in comments to subscribers.

Earlier Tuesday, the China Federation of Logistics and Purchasing said that China's PMI fell to 53.9 in May from 55.7 in April. HSBC's own PMI gauge for China also fell to 52.7 in May from a revised 55.2 in April. 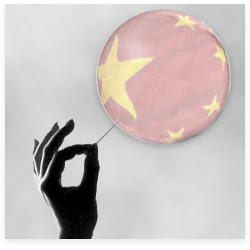 And to top it off, Chinese Central Bank advisor Li Daokui said that the Chinese property bubble dwarfed the US:

The entire interview is here.
Posted by Palmoni at 7:30 AM

europe, who cares? really? wake up and read the news.

I was being facetious--No one cared about Europe this morning, because China was the bogeyman for the day.

But doesn't it mean that if China is today's bogeyman, that Europe's woes are already reflected in prices?

I think most of Europe's woes are already discounted