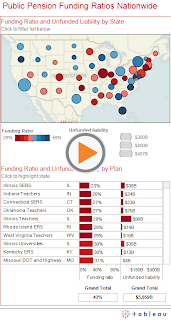 The pigeon used to be AIG; so Wall Street needed someone new to offload their bad bets, and opaque derivatives, so they offloaded their volitility bets to the working stiff's pensions.

Oklahoma TRS did a deeper audit of the $500 million PIMCO investment portfolio, half of which was invested in OTC derivatives, in first-quarter 2010.

“It was too numerous to work our way through,” said James Wilbanks, executive secretary. “At the end of the day, it was hard to reconcile the daily holdings.”

What worried Wilbanks and the Oklahoma TRS was that the OTC derivatives were opaque and they were not comfortable not knowing the true value of the positions.

“We had swaps and we didn’t know which side of the swap we were on,” Wilbanks said.

And how did the pension do last year? In 2009, when we had one of the greatest rallies in the history of the stock market? 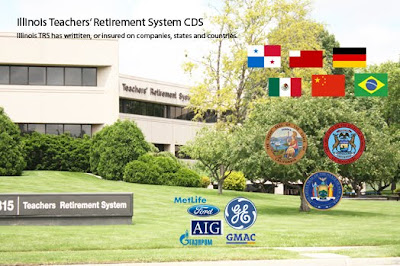 Now this opacity game isn't confined just to Oklahoma. Check out the Teacher pension in Illinois--which lost $4.4 billion in 2009, and which has assets of $33.72 billion, and which is UNDERFUNDED by $44.5 billion or 60.9%:
Dale Rosenthal, a former strategist for Long Term Capital Management, the hedge fund known for its epic collapse in 1998, and a proprietary trader for Morgan Stanley, has seen his share of financial complexities.

But when shown a seven-page list of derivatives positions held by the Illinois Teachers Retirement System as of March 31, obtained by Medill News Service through a Freedom of Information Act request, the University of Illinois-Chicago assistant professor of finance expressed disbelief.

“If you were to have faxed me this balance sheet and asked me to guess who it belonged to, I would have guessed, Citadel, Magnetar or even a proprietary trading desk at a bank,” Rosenthal said.

How did they do? Well they lost $515 million in Q1 on their derivative bets, which have soured further.

And the TRS of Illinois now has the fourth-riskiest investment portfolio with a pension fund with 81.5% of its investments considered risky. And what are they doing? Selling swaps!

In the balance sheet provided to Medill News Service, TRS’s OTC derivatives portfolio showed that in addition to writing CDSs, the pension fund was selling swaptions and shorting international-based interest rate swaps. For each contract written or sold, TRS received a premium.

It’s clear the portfolio is primed for speculation, he added, because if Illinois TRS were hedging, or seeking to mitigate other risky investments, it would be on the buy side of swaptions and CDSs, rather than selling one set of maturities while buying another.

“TRS basically sold insurance and now it has an enormous short volatility position,” said one trader in the tightly knit OTC derivatives industry, who asked that his name not be used in this story.

Unfortunately for TRS, its OTC positions soured in late April when Greece’s debt woes worsened, Standard & Poor’s downgraded Spain’s debt to AA and the euro dropped to its lowest levels since the currency’s inception. The International Monetary Fund and European Central Bank orchestrated a $1 trillion bailout to ensure that Greece and the other PIIGS—Portugal, Ireland, Italy and Spain—would not default on their debts.

“As the European debt crisis worsens, TRS’ positions are going to bleed money,” the trader said.

The pension plan of our nation's teachers! 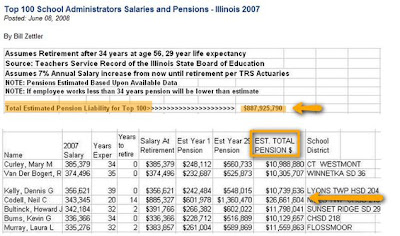 Who want their pensions!
Posted by Palmoni at 10:48 AM

Palomoni, what would u say about owning STT? and did u see Kudlow interview Volker about Fin Reg yesterday?

What the hell? Why were these people investing in OTC derivatives that they had no knowledge about? What happened to the days you bought a little bit of bonds and invested in blue chip companies like PG and JNJ? No worries, the taxpayers with no pensions of their own are on the hook for these idiots!

Hey Palmoni, it seems that Colombian Co. released their preliminary results of the independent sampling at the Anori Project. Basically it confirms previous results but those results only went down about 1.5 meters. Do you have any old historical data on the properties to throw out? Thanks!

Those were just channel samples next to the vein--to see if gold was in the area around it or just around the vein.

The anomalies--well they are doing more samples because the results were really quite good.

After the conclusion of those, they'll be able to give an estimate that they can then talk about.

I think Anori could be huge--that is what the data that I've seen shows. So they are proving that out. We'll know in a month after all the results are in!

Will those results be used to raise capital or can they only do that after completing a NI 43-101? Can you shed some light on whether the company has someone lined up with deep pockets to get things rolling along? I know Ventana has some big sponsors which is supporting their market cap without any formal NI 43-101 being completed showing reserve estimates. Thanks again!

Now we all now why the administration is looking for $50 billion for the teachers nationally. Seeing this, I think they're going to be requesting even more...