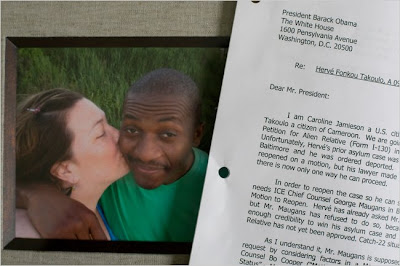 NYT
The letter appealing to President Obama was written in frustration in January, by a woman who saw her family reflected in his. She was a white United States citizen married to an African man, and the couple — college-educated professionals in Manhattan — were stymied in their long legal battle to keep him in the country.

Could the president help, asked the woman, Caroline Jamieson, a marketing executive. She described the impasse that confronted her husband, Hervé Fonkou Takoulo, a citizen of Cameroon with an outstanding deportation order from a failed bid for asylum.

The response came on June 3, when two immigration agents stopped Mr. Takoulo, 34, in front of the couple’s East Village apartment building. He says one agent asked him, “Did you write a letter to President Obama?”

When he acknowledged that his wife had, he was handcuffed and sent to an immigration jail in New Jersey for deportation.

But on Thursday night, Mr. Takoulo was just as suddenly released, after Immigration and Customs Enforcement officials had been questioned about the case by The New York Times. Officials said they were investigating how the letter — one of thousands routinely referred to the agency by the White House to gather information for a reply — had been improperly used by the agency’s “fugitive operations” unit to find and arrest Mr. Takoulo, who has an engineering degree and no criminal record.

While Mr. Takoulo is still subject to the deportation order, immigration officials acknowledged that their actions in the case seemed to violate their standard practice of not using letters seeking help from elected officials as investigative leads. The handling of the case also conflicted with the Obama administration’s stated policy of arresting deportable immigrants only if they have criminal records...

Ms. Jamieson recalled that she cried when Mr. Obama said during a 2008 campaign speech, “With a mother from Kansas and a father from Kenya — ”

“I said, ‘Oh, Hervé, even the alliteration is right — with a mother from California and a father from Cameroon, our child could do the same!’ ”

But they have postponed having the baby they both want, she said, because of his precarious immigration status. One step forward: officials told him he will be granted a work permit after he reports to immigration headquarters on July 1.